Aeon
"What good is it to learn the truth...? You want me to throw away my worthless self-satisfaction in exchange for eternal suffering and despair!? I don't need it...I don't need any of it! What's wrong with turning a blind eye to suffering?! I don't want a truth full of pain! I want a peaceful lie!"
—Kusumi-no-Okami, Persona 4 Golden

Kusumi-no-Okami (クスミノオオカミ, Kusumi no Ookami)? is a major character in Persona 4 Golden.

Kusumi-no-Okami is probably based on the male Japanese god Kusubi, who is more formally known as Kumano-Kusubi (熊野久須毘命) in Kojiki and Kumano-Kusuhi (熊野櫲樟日命) or other variations in Nihon Shoki. When Susano-o was saying farewell to Amaterasu, the two gods were exchanging their treasures in a vowing ceremony. Amaterasu used Susano-o's Totsuka-no-Tsurugi to give birth to the three goddesses known as Munakata-San-Jojin collectively. Susano-O received Yasakani-no-Magatama from Amaterasu, bit it and blew out the fragments which gave birth to five or six gods, and the last of them was Kumano-Kusubi.

Kusumi-no-Okami is a part of Izanami whose goal is to perpetuate the cycle of fog within Inaba. For most of the game, she takes the form of a human girl named Marie who was devoid of her memories until she has to complete her mission; killing herself by absorbing Inaba's fog. The party has to confront her to preserve their bonds with Marie and to put an end to the cycle of fog.

The entity assumes its true form in the Hollow Forest after the fog takes control of Marie, a monster with a deeper version of Izanami's voice. She despairs and wishes to deny the truth in all its form along with everything else, while wishing to embrace peaceful lies and blissful ignorance. If the protagonist does not pursue the true ending route, Kusumi-no-Okami will be the final boss of the game.

Kusumi-no-Okami resembles a sinister, pitch black female figure that has flaming red eyes and no other facial features. What seems to be scale-like armor or paper covers her breasts, waist and thighs, and she also dons a long, red robe-like cape. She is always kneeling with both legs and when idle, she holds her face with her hands. She also attacks by bashing the floor repeatedly with her fists, as if she were in distress.

Marie's ego struggles for control during the battle itself and her power to absorb the fog has also gone out of control, sucking anything in that's around her regardless if it's fog or not. The party defeating Kusumi-no-Okami's true form results in the destruction of the fog she had absorbed and returns her back to her human form.

Kusumi-no-Okami still remains inside Marie as of Persona 4 Arena Ultimax, as Marie transforms into Kusumi during her instant kill attack.

After Yu falls unconscious, he sees a vision of Kusumi-no-Okami in the Hollow Forest, gripping him and telling him Marie's true feelings. Resolving to save her once again, he gains a second wind and helps the other party members recover. The Investigation Team then spontaneously gain their Golden-exclusive Ultimate Personas. Unlike the first time, they are able to quickly pummel Kusumi-no-Okami to stop her from channeling her draining ability. The fight ends with Yu using Izanagi-no-Okami to impale the shadow and free Marie.

Before fighting Kusumi-no-Okami, the player will face Marie. Similar to Shadow Rise, this battle cannot be won no matter what the player does. However, the player will only need to lower her health by about 1/3 (or more depending on difficulty setting). Then the battle will end after a certain number of turns, which will initiate when she uses "Shield of Denial", which is the same as Nyx Avatar of Persona 3's Moonless Gown, which will repel all attacks, including Almighty. Even if the player depletes her health by using [Element] Break skills or items, the outcome will always be the same. However, unlike the battle with Shadow Rise, the player will not recover HP and SP prior to the next battle. Due to Hollow Forest's ability to halve your SP after every battle, your SP will still be halved after the battle with Marie.

The battle itself is simple and straightforward. However, since physical attacks are quite useless in this battle, it is recommended that the player avoid Personas that rely on Physical-type attacks, as well as Chie and Kanji, whose Personas focus on Physical skills rather than Magic skills. It is also highly recommended that the player gather items that restore SP, since it will be the key to ending this battle efficiently. 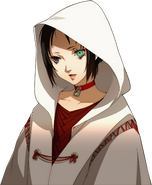 Kusumi-no-Okami in Persona 4 The Golden Animation

Kusumi-no-Okami being attacked by Izanagi-no-Okami