Kushinada-Hime is a recurring demon in the series.

According to the Shinto legend, after Susano-o was expelled from Heaven, he encountered two weeping earthly deities near a river in the Izumo Province. After asking why they wept, they explained that they had to give the Orochi one of their daughters every year to prevent his violent rampage, and now they must sacrifice their eighth and final daughter, Kushinada.

Susano-o was taken aback by Kushinada's astounding beauty and asked for her hand in marriage. Kushinada agreed that if he could defeat the Orochi, she would be his bride. Susano-o then transformed her into a comb and placed her in his hair to hide her from the Orochi.

After Susano-o had tricked and defeated the Orochi, he built a grand palace in Izumo where he and Kushinada were married. Together they produced Yashimashinumo, who is considered the ancestor of Okuninushi.

"Origin: Japan. Daughter of Ashinazuchi and Tenazuchi, and the granddaughter of Ooyamatsumi. She was offered as a sacrifice to Yamata-no-Orochi. Susano-O, who had been expelled from Takamanohara, saved her from her fate. She wed Susano-O and establisehd a shrine in Izumo, where she is a fertility goddess."
—Shin Megami Tensei A-Mode DDS dictionary

"Kushinada-Hime is a goddess in Japanese mythology. When she was human, she was saved from the eight-headed serpent Yamato-no-Orochi by the storm god Susanowo, whom she wedded."
—Shin Megami Tensei III: Nocturne compendium

"The youngest of the eight daughters of Ashinazuchi and Tenazuchi.
Kushinada-hime was to be offered as a sacrifice to the demon Yamta-no-Orochi, but she was saved by Susano'o, who had been cast down from the heavens to the earth for causing mischief, on the condition that she become his wife.
Kushinada-hime's name has been interpret(n)ed many different ways. Some say "kushi" refers to the comb kept by shrine maidens, and that Kushinada-hime was the shrine maiden of a water god. Other claim that it derives from her parents Ashina and Tena, who were elements of later- and early-growing rice, respectively. Still others believe that Kushinada-hime herself was a goddess of rice paddies."

Kushinada-Hime can be acquired through fusion. She appears as a field boss on Ichigaya field and within its Kagurarazaka Zhu Que Caverns gold-level instance alongside Susa-no-O in his true boss room.

"A demon of Japanese mythology. She governs fertility and fields. The youngest of the eight daughters born by Ashinazuchi and Tenazuchi. All of her sisters were sacrificed to Yamata-no-Orochi, but when it was her turn, she was saved by Susano-o and became his wife."
—Shin Megami Tensei IV Apocalypse compendium

Kushinada-hime can teach Nanashi the Media, Mahama and Silent Prayer skills through her Demon Whisper. She benefits from learning Light, healing and support skills.

"A demon of Japanese mythology. She governs fertility and fields. She was the youngest of the eight daughters born by Ashinazuchi and Tenazuchi. All of her sisters were sacrificed to Yamata-no-Orochi, but when it was her turn, she was saved by Susano-O and became his wife."
—Devil Summoner: Soul Hackers 3DS compendium

Kushinada is a demon exclusive to the 3DS remake, available after Nemechi evolves into the octopus form (male growth path), and costs 150 D-Souls.

"A fertility goddess in Japanese lore. The youngest of eight daughters of Ashinazuchi, all her sisters were sacrificed to Yamatano-Orochi. Soon after, Susano-O rescued her."
—Persona 4 Golden compendium

The fifth Persona of the Aeon Arcana, the protagonist can create this Persona with fusion once they achieve both the sufficient Social Link rank with Marie and a level of at least 44.

Kushinada-Hime is the Persona of Touko Aoi, Naoto Shirogane's old friend who is a detective working to investigate disappearances of school students. It has the power of "Precognition," the ability to see events ten minutes into the future. However, if Amatsu Mikaboshi synchronizes with Kushinada-Hime, Precognition can be tuned to see ten seconds into the future.

"A Japanese goddess. She governs fields and fertility. All of her sisters were sacrificed to Yamata-no-Orochi, but she was saved by Susano-o and became his wife."
—Persona 5 background

Kushinada is the fifth Persona of the Lovers Arcana and can be found as a Shadow in Niijima's Palace and in the Sheriruth area of Mementos, with the title "Lamenting Sacrifice." She is one of four Personas to learn the Hysterical Slap skill and one of three to learn Null Sleep. Kushinada is the first Persona to learn Amrita Shower. When itemized through Electric Chair execution in the Velvet Room, Kushinada yields a Wind Wall Skill Card.

"A deity from Japanese mythology that governs fertility and fields. Princess Kushinada was youngest of the eight daughters born to Ashinazuchi and Tenazuchi. All of her sisters were sacrificed to the giant snake Orochi but when it was her turn, she was saved by Susano-o and became his wife."
—Shin Megami Tensei: Liberation Dx2 compendium

Kushinada as she appears in Shin Megami Tensei III: Nocturne

Kushinada-Hime as she appears in Shin Megami Tensei IMAGINE 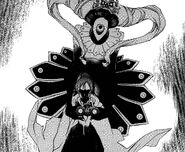 Kushinada-Hime in Persona O.A.
Add a photo to this gallery

Retrieved from "https://megamitensei.fandom.com/wiki/Kushinada-Hime?oldid=400994"
Community content is available under CC-BY-SA unless otherwise noted.