Kurama Tengu is a recurring demon in the series.

Kurama Tengu (鞍馬天狗) are the most powerful and well-known of the Japanese tengu who were said to live in Mt. Kurama in Kyoto. The Kurama-Tengu are not only said to be exceptional warriors, but also have the ability to fend off disease and bring good luck.

The king of the tengu, Sōjōbō (僧正坊), is one of the Kurama Tengu, and in the 12th century was said to have taught Ushiwakamaru, the future famous warrior Minamoto No Yoshitsune, the arts of swordsmanship, tactics and magic.


A Tengu that is said to reside in the Kurama-dera (鞍馬寺) temple in Kyoto, he is thought to be one of the great Tengu of the famous Mount Kurama (鞍馬山). He is believed to have taught Minamoto no Yoshitsune (源 義経), also known as Ushiwakamaru (牛若丸), the art of war in Sōjōgatani, a valley in Mount Kurama. Based on this legend, Miyamasu (宮増), a Noh playwright of the late Muromachi period, created the chant "Kurama Tengu". The modern image of Kurama Tengu best represented by Kanjūrō Arashi (嵐 寛壽郎), who played the role for many years in the "Kurama Tengu" film series. The three Tengus in this film are all dressed as Yamabushi (山伏, mountain monks or hermits) and aren't depicted with their typical long-nosed masks. Kurama Tengu in this illustration has no mask and is holding a conch, which is used by the Yamabushi for communication. In the game, he has a special expel skill called "Starlight" (明星光). If he talks with Karasu Tengu or Koppa Tengu during battle, they will have special dialogue."
—Kazuma Kaneko Works III (translation courtesy of Bee Translations).

Kaneko's human-like design for Kurama Tengu draws inspiration from Jirō Osaragi's Kurama Tengu, from the eponymous novel Kurama Tengu, later adapted into film in 1928. Kurama Tengu wears the attire of a yamabushi (山伏, "mountain hermit") which is said to be the basis of the mythical Tengu. He can be seen blowing into a horagai conch and wearing distinctly Jewish accessories like a tefillin and kippah. This deviation is believed to be an intent to infuse the Japanese-Jewish common ancestry theory, despite lacking official clarification.[1]

Kurama can be only obtained by evolving its predecessor Karasu and is one of the few demons in the game that can only be created via secondary evolution. Even though Karasu can only be created by evolving a Koppa, Karasu can be encountered in normal battles and persuaded to join. Therefore, it isn't necessary to begin with a Koppa to ultimately obtain a Kurama, but some of Koppa's skills will be missed if that step is skipped.

Kurama Tengu can only be acquired through fusion, though variations appear in Shibuya's Celu Tower gold level instance. In the Mount Kurama instance accessed through Nakano, he is a central NPC and final boss for all levels. By gathering cords from the endchest, players are able to fuse a more powerful Kurama Tengu that learns a unique almighty spin move.

"A type of tengu said to have lived in Mt. Kurama in Kyoto. The most powerful and well-known of the tengu, they have the power to fend off disease and bring good fortune."
—Shin Megami Tensei: Strange Journey compendium

Kurama Tengu regularly appear through Enemy Search in Sector Delphinus. However, his fusion requirements can be unlocked relatively early in the game, being a special fusion between Koppa Tengu and Karasu Tengu.

Kurama Tengu can be obtained through special fusion, by fusing a Koppa Tengu with a Karasu Tengu. He can teach Flynn the Mazanma, Mahama, Blood Ritual and Zandyne skills through his Demon Whisper.

Kurama Tengu can be found within the Tennozu Shelter. He can teach the Mazanma, Mahama, Trafuri and Zandyne skills through his Demon Whisper. Kurama Tengu benefits from learning Force and Light skills.

"A tengu that is said to have lived in Mt. Kurama in Kyoto.
The most powerful and well-known of the tengu, he has the power to fend off disease and bring good fortune. He is also said to have trained Yoshitsune how to fight with a sword when Yoshitsune was still a child. Some believe hi to be Bishamonten's night form."
—Shin Megami Tensei V lore

The Kurama Tengu created Amanozako in order to create a Great Tengu to lead them during the end times. However, Amanozako went berserk and had continued fleeing from the tengu ever since. The tengu then realized that Amanozako was particularly attached to the protagonist and concocted a trap to regain their lost creation in the quest "The Destined Leader," with one tengu referring the protagonist to another. When they arrive, the Kurama Tengu there demands Amanozako; when the protagonist refuses, he calls upon Zaou-Gongen. Despite their efforts, they are both defeated and the tengu give up on trying to reclaim Amanozako.

Kurama Tengu can be found as a normal enemy in the upper areas of Yurakucho that can be reached by heading southwest from Uchikanda.

Enemy Kurama Tengu can be spoken to by Koppa Tengu and Yoshitsune resulting in a special conversation. In the former, he encourages the lesser tengu to keep training, while in the latter, he sees that Yoshitune's devotion had not wavered since they were together and gives him his blessings. In both cases, he gives an item to them to help their efforts before leaving.

"Tengu said to have lived in Mt. Kurama in Kyoto. The most powerful and well-known Tengu, they have the power to fend off disease and bring good luck."
—Devil Summoner: Raidou Kuzunoha vs. The Soulless Army devil chart

"A type of tengu said to have lived on Mt. Kurama in Kyoto. The most powerful and well-known of the tengu, they have the power to fend off disease and bring good fortune."
—Persona 5 background

Kurama Tengu is the ninth Persona of the Hermit Arcana and can be found as a Shadow in Shido's Palace and the Sheriruth area of Mementos, with the title "Monk of the Valley." He is one of six Personas to learn Masukunda and one of four to learn Growth 3. When itemized using Electric Chair execution in the Velvet Room, Kurama Tengu yields a Garudyne skill card.

"A type of tengu said to have lived in Mt. Kurama in Kyoto. As the most powerful and well-known of the tengu, they have the power to fend off disease and bring good fortune. Also rumored to be the incarnation of Bishamonten."
—Shin Megami Tensei: Liberation Dx2 compendium

Kurama Tengu as he appears in Devil Summoner: Raidou Kuzunoha vs. The Soulless Army

Kurama Tengu as he appears in Persona 5 Royal 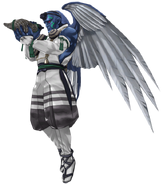 Kurama Tengu as he appears in Persona O.A.