B
Kumiko Hatano is the girlfriend of the protagonist of Shin Megami Tensei: Devil Summoner.

Kumiko is the protagonist's girlfriend and is first seen at the Afro Cafe. Several conversations with her determines his Alignment. One such conversation involves the Hirasaki City Council's recent decision to modernize the city and the hero's opinion on it. Afterwards, Kumiko decides to check out the book Theories of Ancient Japanese Civilization written by Professor Azuma from the Public Library. However, she realizes she forgot to bring her library card, and asks the protagonist for his. His reaction also determines his initial alignment, but either way they check the book out.

Kumiko tells him that she needs to go to her class at Kitayama University. When they arrive, it turns out the front gate is locked and they have to use the back entrance. She then requests that the hero goes to the Amusement Park to buy tickets for Moloch's reunion concert.

Later in the game, her house gets corrupted by the Otherworld and she is nearly kidnapped by Strigoii and Strix. The duo are stopped by a Kyouji Kuzunoha-possessed Takashi, however.

After Tendou's defeat, she is kidnapped by Sid Davis and taken to the New City Hall to be used as a vessel for the unsealing of Inaruna, whom she is a descendant of. 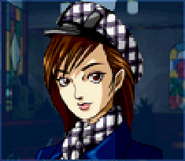