Kumbhanda is a demon in the series.

Kumbhanda is one of a group of dwarfish, misshapen spirits among the lesser deities of Buddhist mythology. They are known to suck the life out of humans and are servants of the southern member of the Four Heavenly Kings, Zouchouten.

Kumbhanda was an enemy-only mob for a long time, appearing only as a mini-boss on B10 of Ichigaya Camp's gold level and in the boss room when Zouchouten is summoned. He appears in Hongou instance's Advanced level as a regular mob killed to summon Mithra.

He was later added as a reward for a quest given by Shinjuku Babel's Cathedral master. His special fusion is Gandharva and Rakshasa.

"Demons of Buddhist origin, known for draining the life energy of humans.
It is said that they often change shape and take the form of a gourd. They stand three meters tall, with red hair and dark skin, and have the body of a human but the head of a white horse. They once served Rudra, but according to Buddhist scriptures, they now follow Zouchouten of the Four Heavenly Kings."
—Shin Megami Tensei V lore

Kumbhanda appears as a punishing foe in Konan 2nd Block, standing in a dilapitated parking garage. He will let out a loud laugh and chase the protagonist should they enter this building. As part of the subquest "Kumbhanda's Bottle," a Succubus will ask the protagonist to defeat Kumbhanda, saying he used to be her good friend but began losing his mind. Defeating Kumbhanda (before or after talking to Succubus) will have him grant the player the titular Kumbhanda's Bottle with his dying breath.

Kumbhanda will later appear as a normal enemy in the Chiyoda region of Da'at, beginning in Nihonbashi.

Kumbhanda is the true identity of the police chief, Atsushi Nakagome, and is fought in the police station.

"A Buddhist demon said to drain human life energy. He has dark skin, stands 3 meters tall, and sometimes changes his shape to a gourd. Known to have once served Rudra, the god of storms."
—Persona 5 background

Kumbhanda is the seventh Persona of the Hermit Arcana and can be found as a Shadow in Niijima's Palace and the Sheriruth area of Mementos, with the title "Life-draining Spirit." It is one of four Personas to learn the Hysterical Slap and Rage Boost skills and one of five to learn Tempest Slash. When itemized through Electric Chair execution in the Velvet Room, Kumbhanda yields a Rage Boost skill card.

The Shadow of Shinsuke Kishi, a CEO of a company who abuses his employees and plagiarizes their work, takes the form of Kumbhanda when encountered in Mementos during the request "We Aren't Just Your Slaves." Shadow Kishi has access to the Brain Shake skill and can fully heal himself with the Diarahan skill if given the chance. Shadow Kishi is weak to Bless skills.

Kumbhanda later appears in the Slot Room of Niijima's Palace. Two of these Shadows attempt to kill the Phantom Thieves as they enter the area.

Kumbhanda is mostly referred to as the Jailer in Digital Devil Saga: Avatar Tuner 2. Appearing as a unique demon in this game, he holds Fred's friend and other members of the Lokapala captive in the Internment Facility where prisoners are eventually ground up, aged for several weeks, and canned to sate the Jailer's appetite. Many of these cans and waste litter his observation room at the north end of the Internment Facility.

Upon entering the facility for the first time, the party engages Kumbhanda and falls prey to Kumbhanda's unique attack that restrains the party without fail, unique to this game. After being imprisoned the party breaks out with the help of outside insurgence. Continuing on into the lower floors of the Internment Facility, Kumbhanda spots them without fail and gives chase. After gaining various keys and a corpse of a Blob, the party reaches the bottom where they let the facility process the Blob into food. After being canned, Gale and company place it in his office as a method of weakening Kumbhanda. After Kumbhanda mistakenly consumes it, the party surrounds him. Before engaging in battle and subsequently killing the Jailer, Gale exclaims that one should always carry a Dis-Ache.

Before facing Kumbhanda all 1-star Mantras can easily be maxed out in front of the large Karma Terminal. Setting Zio, Void Force, and Dia will easily get the party through this fight. Elec Boost is also an option if anyone has learned the 2-star Bolt Lord Mantra. Cast Void Force at least once per turn and use Zio. Do not use Force skills, the damage will be nullified and the party will lose 2 Press Turns.

Kumbhanda is also the only boss that is not immune to all ailments, as he can be Muted. Rendering Kumbhanda Mute will make him waste Turn Icons trying to use skills, and the only attacks he can use are Gorge and Power Wave.

"A demon of Buddhist lore, said to drain human life energy.
It has dark skin and stands three meters tall, but sometimes changes shape to a gourd. It is known to have once served Rudra, the god of storms."
—Devil Survivor 2 compendium

Kumbhanda as it appears in Shin Megami Tensei IMAGINE 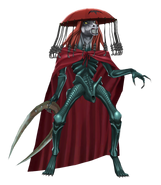