Kugutsu is a demon in the series.

Kugutsu is apparently based on a broken female mannequin. Kugutsu may refer to the dolls used by traveling performers called Kugutsu-mawashi. From ancient times, people believed that dolls could take the place of human beings. Dolls were also considered incarnations of gods and so were a part of folk religion. Eventually, bands of performers started to travel the country, visiting shrines and temples and villages, and performed with their puppets. These were the Kugutsu-mawashi.

"Origin: Tokyo. A killer doll driven with kugutsu magic. It is nothing but a mannequin ordered by demons to attack humans."
—Shin Megami Tensei A-Mode DDS dictionary 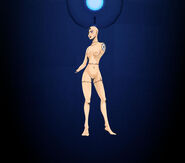