In addition, he wears a buddhist beaded necklace.

An exceptional drama director with a peculiar fashion sense. He’s strict on himself and others, causing his production staff to fear him. Currently disdains the entertainment and Daitama TV industry.

Kuen Tarachino first enters the story when the still-inexperienced Tsubasa Oribe is cast as the lead of his new TV drama "Sneeze-Detective Maho" against his wishes. During the rehearsals for the first episode, he becomes frustrated with Tsubasa's amateurish performance. He forces Tsubasa to stay after rehearsals are over in order to drill instruction into her, however, it's at that time that he is overtaken by the Mirage Excellus, and he disappears into Illusory Daitou TV.

As Itsuki Aoi's party races in to rescue him, the Excellus-possessed Kuen stops the party on multiple occasions and challenges Tsubasa's acting skills. The trials he sets forth lead Tsubasa to grow as an actress, and when the party reaches the end of the dungeon, he challenges Tsubasa one last time, and she proves herself by pulling off a flawless performance as Maho.

Seeing Tsubasa's progress, Kuen realizes the harm that Excellus is wont to do, and drives him out of his body with Itsuki's help. After Excellus's defeat, he returns to work, foggy on the details that occurred in the Idolasphere, but films "Sneeze-Detective Maho" regardless. Happy with the results of Tsubasa's startling growth as an actress, he praises her as the future of Japanese entertainment.

During Eleonora Yumizuru's second side story, she explains to Itsuki that the producers of her romance drama "Dandelion in Love" have hired Tarachino as the new show-runner. Tarachino wishes to take the show in a drastic new direction, however, changing the genre from high school romance to horror. Eleonora's character Angel was to be a victim in the new direction, but after training in the Idolasphere inadvertently leads her to overcome fear rather than learn to express it, she manages to persuade Tarachino to tweak his concept for the show's new direction. Tarachino turns "Dandelion in Love" into "Horror Hunter Angel," in which Angel hunts monsters that are stalking her fellow students.

Kuen later appears and presents Eleonora with a new offer where he has an upcoming co-production between Japan and Hollywood and he wants to cast her as the lead in his new film, "Arrow of Destiny," which will start shooting in Hollywood at a later date. Eleonora agrees and plans to work with Kuen on the film once the matter with the Mirages is resolved. 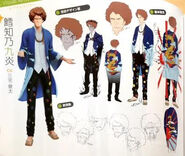