Bloodbat
"I've missed you, Kresnik! I missed you so much, I could kill you! Shall we merge?"
—Kudlak, Devil Survivor

Kudlak is a demon in the series.

A Kudlak is a type of vampire that originates from Croatian and Slovenian lore. In legend, a person born with a caul was destined to become either a Kudlak or a Kresnik. A person so destined to become a Kudlak would already begin a career of evil while still alive - his soul would leave his body at night in animal form and fly through the air to attack people or to magically do other harm to the community he lived in.

When he died, he became an undead vampire who was then an even greater threat to the community. But if a person born with a caul became a Kresnik, he became a champion of the community. While he lived, his soul left his body in animal form at night to fight against both living and undead Kudlaks.

Where the Kresnik was the representative of goodness and light, the Kudlak symbolized evil and darkness.

Kudlak acts as one of the five demons that controls the Pentalpha system. Players can align with him to fight against mobs representing the other demons within the system. Those fighting against him will face waves of demons belonging to the Femme, Night and Evil Dragon races.

By acquiring enough power for him, players can obtain the ability to fuse him in a special fusion of Loa and Bicorn.

"An evil vampire that fights Kresnik, a proxy of God.
It is said that all bad things, including disease, poor harvests, and bad luck, are all due to a Kudlak. He transforms into various animal forms to fight with Kresnik, but his other forms are always black."
—Shin Megami Tensei: Strange Journey compendium

Kudlak and Kresnik are still locked in their eternal stalemate. Kudlak offers the protagonist a valuable vest if he helps him get a strong weapon against Kresnik. While claiming he would defeat him easily and was more interested on the weapon's poisonous potential to inflict pain upon Kresnik, both remain unable to defeat each other anyway even if provided with the weaponry they desire. Completing his EX Mission will slightly shift the protagonist's alignment to Chaos.

Kudlak can be found in Camp Ichigaya. He can teach Nanashi the Energy Drain, Tarukaja, Pandemic Bomb and Death's Door skills through his Demon Whisper. He benefits from learning Darkness, ailment and support skills.

"An evil vampire who fights Kresnik, a proxy of God.
It is said that all bad things, including disease, poor harvests, and bad luck, are all under Kudlak's purview.
He transforms into various animal forms to fight with Kresnik, and his other forms are always colored black."
—Devil Summoner: Soul Hackers 3DS Compendium

Kudlak is the highest-level Sub-Persona of the Magician Arcana, and can only be fused after the player obtains the "Scourge's Cape" key item from Special Screening #39: "Double Bear-relled Battle". Kudlak's special fusion requires Balor and Baphomet.

"An evil demon who died once, returned as a vampire, and is now stalked by Kresnik"
—Demonary, DemiKids

Kudlak appears in the first stage of Wind Makai on Jin's route. Wanting to oppose the Imperium's forces which have taken over, he casts Marin Karin in the hopes of charming Jin into fighting alongside him. When that fails he goes off to fight the enemy by himself. Jin must hurry to help Kudlak before the Unicorn and Culebre get to him and kill him. After Jin beats the enemy and saves him, Kudlak joins the party.

Kudlak is the one behind the "Bloodless Murders" which claimed Kaido's brother. On the 4th Day, Kudlak will appear chasing Mari in Shibuya around 17:00. A battle in the park will commence. All demons (minus Kudlak) must be defeated and Mari must escape. She warns the party not to kill Kudlak, or else he will return once more even stronger than before and will eventually become near invincible in this cycle. If the party does defeat Kudlak, he will be level 53 when faced the next day. Mari, possessed by Kresnik, will reveal that Kudlak can only be killed once and for all if a certain powder is used, but it was stolen along with Mari's bag.

After the player finds Mari's bag, he has the option to give it to Mari, allowing for the party to assist her and Kresnik in defeating Kudlak. However, due to circumstances in the plot, this is not advisable if the player wants to save all potential party members. Giving the bag to Kaido, instead, will cause him to deliver the bag to Mari himself, delaying his search for Keisuke and averting their battle.

If the player gets the bag delivered to Mari through any possible means, they are to assist her and Kresnik in defeating Kudlak. With the bag in tow, Kresnik must land the killing blow on Kudlak to vanquish him for good. Defeating Kudlak otherwise, or allowing him to escape the battlefield, will waste the only chance at destroying him. After a some time has elapsed in battle, Kudlak will attempt to flee, and the player must also prevent him from doing so. Should Kaido be present in the battle and he is to engage Kudlak, he has skills that can leave Kudlak at 1HP to ensure Kresnik gets the killing blow.

After the player helps Mari and Kresnik defeat Kudlak, he unlocks both Kudlak and Kresnik for fusion.

"An evil vampire who fights Kresnik, an agent of God.
It is said that all bad things, including disease, poor harvests, and bad luck, are due to Kudlak. He constantly ambushes the blameless and defenseless. He assumes various animal forms to fight with Kresnik, such as horses and pigs, but his alternate forms are always black."
—Devil Survivor 2 Compendium

Kudlak has a brief appearance on Day 6. He spawns as a non-boss enemy during the Dragon Stream ritual. He is available whenever one has access to fuse him, whether he is defeated or not.

"A vampire that represents evil and darkness who opposes Kresnik, he that is blessed by light. It is said that all bad things, including disease, poor harvests, and bad luck, are due to Kudlak.He transforms into various animal forms to better fight Kresnik, however, these other forms always seem to have a black hue."
—Shin Megami Tensei: Liberation Dx2 Demonic Compendium 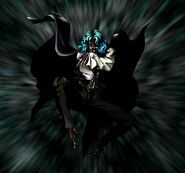 Kudlak as he appears in Shin Megami Tensei: Devil Summoner 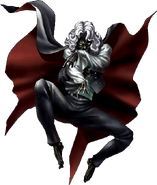 Kudlak as he appears in Shin Megami Tensei IMAGINE

Kudlak as he appears in Devil Children Messiah Riser.

Kudlak as he appears in Card Summoner

Kudlak as he appears in Devil Survivor

Kudlak as he appears in Devil Survivor 2