Elite
"Oh, a human! I found a human! Woooow, I can't believe a human would be in a place like this. Hey, hey... let's play! We can play the human-killing game!"
—Kuda, Shin Megami Tensei: Strange Journey

Kuda, also known as Kudagitsune, is a demon in the series.

Kuda-gitsune, also as Kuda or Kanko, is a yokai supposedly employed by Japanese kitsune-tsukai, those who use foxes as spirit familiars that possess humans (usually young women). According to the Zen'an Zuihitsu, the Kuda-gitsune is a fox the size of a weasel or rat, with vertical eyes and thin hair. The magic-user summons the Kuda-gitsune to appear inside a bamboo pipe he is holding, whereupon the fox will answer all the questions it is asked.

Starting in Nagano Prefecture, it is told about in the Chūbu region and also in parts of the Tōkai region, southern Kantō region, Tōhoku region, and so on. There are no legends of kudagitsune in Kantō besides the Chiba Prefecture and Kanagawa Prefecture, and this is said to be because Kantō is the domain of the osaki.

Just like its name says, there are various legends about how they are small enough to fit into a bamboo pipe or about as big as a match box and would multiply until there were 75 of them, and so on. A Kuda is also called a "pipe-fox."

"A fox used by people known as "Kuda-users." They are beasts that possess humans. Those possessed do not eat much, but start eating raw miso. Kuda are passed on from master to student."
—Shin Megami Tensei: Strange Journey compendium

Kuda can be found in Sector Carina with the enemy search app.

Kuda appears in the "Hunter Tournament Prelims" Challenge Quest while supporting Flynn's second opponent, Commander Dynamo. It can later be found in Shibuya. Kuda can teach Flynn the Mabufula and Tetanus Cut skills through its Demon Whisper.

Kuda can be found in the Shinjuku West Entrance Park. It can teach the Sukukaja, Tetanus Cut, Blight and Mabufula skills through its Demon Whisper. Kuda benefits from learning Ice skills. 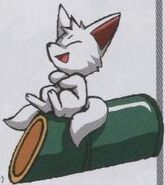