Jalen K. Cassell
"You were supposed to be no more than an illusion! How could you...defeat me? My new universe...my salvation...it was all just a feeble dream!"
—Krishna, Shin Megami Tensei IV Apocalypse

Krishna is a demon in the series.

Krishna, also known as Krsna, Govinda, Mukunda, Madhusudhana or Vasudeva, is the eighth avatar of Vishnu, the Preserver, who is said to appear whenever the world is at risk. He is the god of Love, Compassion, Protection, and Beauty along with being a divine hero in Hinduism. Krishna is recognized as the Svayam Bhagavan which is the complete incarnation of Vishnu. His Name is sometimes translated as "all-attractive" or "dark blue."

Described as a blue-skinned young boy playing a flute, he battled many demons and fought in the Kurukshetra War alongside a warrior named Arjuna. He is a famous deity in the Mahabharata and he is believed to have told the Bhagavad Gita to Arjuna when he was reluctant to fight. Krishna is one of the most widely worshipped and popular of all Hindu deities.

Krishna was raised by cow herders and is often portrayed as an infant eating butter; a young boy playing a flute, and as in the Bhagavata Purana; a young man along with Radha; a young man surrounded by women; or as an elderly gentleman giving direction and guidance, as in the Bhagavad Gita. As a boy, he would play his flute, causing women to flock to him. As an adult, he became a great tactician. He left his body after being shot in his left foot by mistake by a hunter named Jara, who mistook it for a deer.

"A divine hero of Hindu mythology. He is the eighth avatar of Vishnu, who is said to appear whenever the world is at risk. Name is sometimes translated as "all-attractive." Raised by cow herders. As a boy, he would play his flute, causing women to flock to him. As an adult, he became a great tactician. Shot in the back of the leg by mistake by a hunter named Jara."
—Shin Megami Tensei IV Apocalypse compendium

Krishna interrupts the war between the forces of Law and Chaos as the representative and main leader of the Divine Powers. He has a messiah complex and an extremely patronizing view of humans, seeing them as expendable in his goal of universal salvation, and isn't very far from manipulating his adversaries to achieve his objectives. Much like Dagda, however, his final goal is to put an end to YHVH's manipulations and false flag war so he and his gods may create a new world.

Initially, he is sealed within an ark in Kanda-no-yashiro in Tokyo, but Odin manipulates Nanashi and Asahi (with a little help from Dagda, if Nanashi attempts to negate Odin's manipulations) into freeing him. He immediately sets out to convince Flynn to join them as his "Kalki," his own version of the Godslayer. Flynn was then kidnapped by Krishna, and the one that Nanashi and his cohorts met for the majority of the game was actually Shesha.

After Nanashi takes down both Merkabah and Lucifer, he will enact his plan to supplant YHVH as the Creator and permanently claiming the new universe for Polytheism, as well as getting a step ahead of Dagda. Shesha will kill all of the Hunters in the celebration and reveal himself to be actually impersonating Flynn. After devouring Asahi as well, he will drop to Kasumigaseki and transform into the Cosmic Egg, forcing a rebirth of the universe, with Krishna and his compatriots at the center.

When confronted on the topmost floor of the Cosmic Egg, he will fuse Flynn with himself and become Vishnu-Flynn (ヴィシュヌ フリン) as a last ditch attempt to defeat Nanashi. If Nanashi accepts Dadga's offer, the destruction of the entity will kill Flynn, and Nanashi will kill Krishna using Masakado's Blade. Dagda will then revive Flynn as Nanashi's Godslayer alongside a human partner killed by either Shesha or Nanashi himself, albeit both allies will become deranged and maddened puppets for Dagda and Nanashi. However, if Nanashi rejects Dagda's deal instead, Flynn will survive the impact and kill Krishna. He then joins Nanashi afterwards with his sanity intact.

Regardless of his fate, Nanashi may then return to Kanda-no-yashiro, to the place Krishna was first sealed and talk to the ark where he's sealed. Seeing him and Nanashi have the same goal, he will join them and become available for fusion.

Krishna will present himself to Nanashi and company after they reach the center of the Tsukiji Konganji temple and witness Odin being defeated by Flynn. He will attempt to prevent the party from leaving and attack them directly.

Krishna will start by using regular attacks, Combat Tara, Zandyne and Ziodyne. After a few turns, he will start using Dream Raga or Venomous Raga to inflict multiple status ailments and debuffs on the party (thankfully, no more than once per turn). The party can make use of Dekaja and Dekunda to remove his debuffs on the party or buffs to himself. Silent Prayer will also remove all buffs and debuffs. Having Navarre as a partner can grant access to Nanashi's party automatically. However, having Hallelujah as the main partner will prevent the more debilitating ailments from taking hold thanks to his Warding Shout skill, ensuring that the party can work to level the playing field before Krishna's next turn.

If any party members remain afflicted with ailments, Krishna will frequently use Moxagita, which inflicts heavy Almighty damage to those with ailments. However, it will always miss party members with no ailments. Furthermore, as long as one party member is suffering from at least one ailment, Krishna will not use Venomous Raga or Dream Raga. This means it can be very helpful to leave one party member with a minor ailment (such as poison), so Krishna doesn't use his dangerous Raga attacks, and keeps losing press turns when he uses Moxagita.

Krishna is weak to Darkness skills, and a Pisaca can be obtained from Ikebukuro and be made to exploit this. Tiamat can also be found in Tsukiji Konganji and can grant access to the Silent Prayer skill. Alice excels in this fight due to her resistance to all ailments, as well as her Die For Me! and High Dark Pleroma skills.

During the battle, Krishna will attempt to convince Nanashi to stop fighting him, offering his hand to Nanashi, with the outcome varying based on Nanashi's decision. 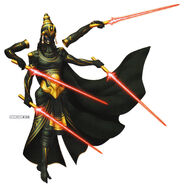 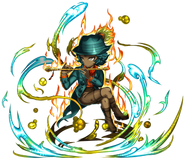 Krishna as he appears in Brave Frontier