"You are a rare breed... you deserve praise for your efforts already. But you haven't come to be praised, have you? And I haven't left my post at the Confinement Chamber merely to praise you. Shall we begin?"
—Kohryu, Devil Summoner 2: Raidou Kuzunoha vs. King Abaddon

Kohryu, also known as Huang Long, is a demon in the series.

The Huang Long, literally meaning Yellow Dragon (黃龍), is the Chinese gold dragon that reigns over the Si Xiang, celestial creatures in Chinese constellation (Baihu, Xuanwu, Qinglong and Zhuque) and is located in the center of the four beasts. It is the embodiment of the element of Earth in Chinese five elements (Wu Xing) along with the Chinese quintessence, as well as the changing of the seasons. It is also known as Kohryu in Japan and Hwang-Ryong in Korea.

Huang Long is sometimes regarded to be the same as Qilin from the Si Ling. The Yellow Dragon does not appear in Japanese mythology: the fifth element in the Japanese elemental system is the void, so there cannot be an animal representing it. However, some consider the Ōryū as the Japanese counterpart of the Yellow Dragon since they share some similarities.

"One of the holy dragons of Chinese lore, the Golden Dragon appears in times of great fortune or joy. His dominion over the earth extends to the four gods Long, Gui Xian, Feng Huang, and Baihu."
—Shin Megami Tensei: Strange Journey compendium

Huang Long can only be fused through a special fusion of Gui Xian, Long, Feng Huang and Baihu when the protagonist reaches level 78.

Huang Long can teach Nanashi the Megidolaon, Samarecarm and Luster Candy skills through its Demon Whisper. It benefits from learning Almighty skills.

"One of the holy dragons of Chinese lore, the Golden Dragon appears in times of great fortune or joy.
His dominion over the earth extends to the four gods Qing Long, Xuanwu, Zhuquem and Baihu."
—Shin Megami Tensei V lore

As a part of the Ritual of Unsealing, a Great Kohryu must be fought as well as most Ssu-Ling and Shouten. Later on, after the defeat of Amatsu Mikaboshi at the Confinement Chambers, the Great Kohryu gives Raidou the Thunder Taiko, which allows him to summon Great Kohryu on the map. He carries Raidou wherever he wishes to go in the capital through the air, in a similar way to the Large Tarrasque in both Raidou games.

Raidou must visit Kohryu for the Case File, Golden UFO, where it is revealed he has been fighting the insects that threaten the capital and has become exhausted enough for people to get a glimpse of him. As compensation for Raidou telling him this, he allows access to the 333rd Floor of the Confinement Chambers.

Kohryu is known as Wong Long, after the Cantonese version of his name.

Kohryu is the ultimate Persona of the Hierophant Arcana and a special fusion of the four Ssu-Ling. It can only be fused using a cross spread of Genbu, Seiryu, Suzaku and Byakko and the protagonist must also be Lv. 61. In order to fuse Kohryu, the protagonist needs to have completed the Old Couple Social Link.

His Heart Item is Kohryu's Scale, which nullifies Strike damage to the bearer.

Kohryu holds the same function as in Persona 3, but has a base level of 66 instead. In The Answer, Aigis is able to summon Kohryu through ordinary fusion.

Once again, Kohryu is both the ultimate Persona of the Hierophant Arcana and a special fusion of the four Ssu-Ling. That means that to fuse it, the protagonist not only needs Byakko, Genbu, Suzaku and Seiryu on hand, but must also be at least Lv. 76 and must also have completed the Ryotaro Dojima Social Link.

Yu first summons this Persona via fusion, after hearing Ryotaro Dojima's call to him to not give in while saving Nanako during the battle against Kunino-sagiri. Kohryu successfully shielded Yu and Nanako from his friends attacks and helped free them while they were manipulated under Kumino-sagiri's control. He is also the Persona representing the bond between Yu and Dojima.

In the True Ending special, Kohryu appears to aid Yu against Margaret's Helel, and brings a message of support from Ryotaro.

"Known as the gold dragon, it reigns over the Ssu-Ling, celestial creatures of Chinese myth. It is located in the center of the four beasts."
—Persona Q: Shadow of the Labyrinth compendium

"Known as the Gold Dragon, it reigns over the Ssu-Ling, celestial creatures of Chinese lore. It is located at the center of the four beasts."
—Persona 5 background

Kohryu is the ultimate Persona of the Hierophant Arcana and can only be obtained through fusion in the Velvet Room once the Hierophant Confidant with Sojiro Sakura is completed. In order to fuse Kohryu, the protagonist must perform an advanced fusion utilizing Genbu, Seiryu, Suzaku and Byakko.

Kohryu is one of four Personas to learn Psycho Force and one of two to learn Life Aid. Kohryu is also the only source of the Psy Amp skill.

When itemized through Electric Chair execution, Kohryu yields the Sudarshana slingshot for Morgana, which has 308 ATK, 98 ACC, fires 5 times a turn and adds the Random Ailment (low) effect to Morgana's Gun attacks.

In Persona 5 Royal, if Kohryu is fused during a fusion alarm, he'll yield Sudarshana EX, a stronger variant which instead has a high chance to afflict Dizzy while used, giving an opening for Technical damage and a quick way to Down the respective enemy.

After defeating Ananta in the final floors of the Karma Temple, the Embryon can come down from the tower and find out four powerful demons have taken over several sectors of the Junkyard. Feng Huang appears in Svadhisthana, Genbu in Anahata, Long in Ajna, and Baihu in Manipura. Each one of these, when defeated, will drop a single orb. After the defeat of the four, Huang Long will appear behind a secret door in the Karma Temple. Huang Long fights with several forms, which he changes when grunting or screaming, and has the special move Celestial Ray, which hits for mega Almighty damage and inflicts random ailments.

Once he is defeated, behind another door and a red wall is his own orb, which will be confiscated by the Temple, granting access to the Five Gods Mantra and to Huang Long's skillset.

Kohryu becomes available to the protagonist once they reach Fate Rank 5 with Miyako Hotsuin. It is now the strongest member of the Snake race, beating out Hoyau Kamui which formerly held that title in the original game.

"One of the holy dragon of Chinese lore, the Golden Dragon appears in the time of great fortune or joy. His dominion over the earth extends to the four gods Long, Gui Xian, Feng Huang, and Baihu."
—Shin Megami Tensei: Liberation Dx2 compendium 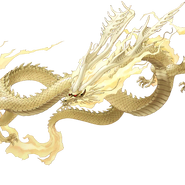 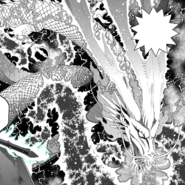 Kohryu as it appears in Devil Summoner: Raidou Kuzunoha vs. The Lone Marebito

Huang Long as it appears in Kyuuyaku Megami Tensei

Huang Long as it appears in Shin Megami Tensei: 20XX

Kohryu in Persona 4 The Animation

Kohyru in Persona 4 The Golden Animation 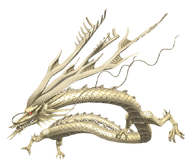 Kohryu in Persona O.A. (No Background)