Kodama is a demon in the series.

A Kodama (木魅) is a spirit from Japanese folklore, which is believed to live in certain trees. Cutting down a tree which houses a kodama is thought to bring misfortune, and such trees are often marked with shimenawa rope.

"In Japanese mythology, they are the spirits of plants. They are born from trees that live 100 years."
—Shin Megami Tensei III: Nocturne profile

"A general name for spirits that inhabit trees. The name is also sometimes used to refer to the trees they live in. The word "kodama" can also mean 'echo' in Japanese, stemming from the belief that mountain echoes are created by these tree spirits. Attempting to cut down a tree inhabited by a kodama is said to bring a curse."
—Shin Megami Tensei IMAGINE compendium

Kodama are a regular spawn in the Suginami and Nakano fields, including a larger field boss version that appears in multiple locations in Suginami. Early quests and story-line acts regularly feature them. Kodama also appear as one of the two unique bazaar tending demons in Arcadia.

"In Japanese mythology, they are the spirits of plants. They are born from trees that live 100 years.
It was once thought that the echoes heard in valleys were actually from Kodama replying."
—Shin Megami Tensei V lore.

Kodama can be found as an enemy in Shiba.

"Japanese plant spirits born from trees that have lived for a 100 years. Cutting down one of these trees is said to cause misfortune."
—Persona 5 background

Kodama is the first Persona of the Star Arcana and can be found as a Shadow in the Aiyatsbus area of Mementos, with the title "Wavering Tree Spirit." It is the first Persona to learn the Psi and Fear Boost skills. When itemized through Electric Chair execution in the Velvet Room, Kodama yields a Fear Boost Skill Card. Kodama is one of the ingredients used in advanced fusion to create Neko Shogun for one of Caroline and Justine's requests during the Strength Confidant.

Kodama as it appears in Shin Megami Tensei III: Nocturne

Kodama as it appears in Shin Megami Tensei IMAGINE

Kodama as it appears in Persona 5 Royal 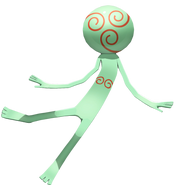 Kodama as it appears in Persona O.A.