Takuo Yamagishi
"You might have done a variety of things in hiding in your hometown, but you will behave yourself here."
—Principal Kobayakawa, Persona 5

Kobayakawa, otherwise unnamed and only referred to as the Principal in the Japanese version, is a character from Persona 5. He is the principal of Shujin Academy.

Kobayakawa is an overweight and bald middle-aged man. He wears a beige suit, white undershirt and red bow tie.

Kobayakawa is a hedonistic and apathetic man with an overinflated ego who only cares for the reputation of his school and his own status. When eavesdropped in Kichijoji in Royal, he even outright states that he's doing this all for himself, and that people might envy him. Unfortunately, many of his policies do more harm than good, as he is most well known for condoning Kamoshida's heinous crimes (most notably abusing and molesting students in the PE office or any other private area where he believes nobody can see or eavesdrop) simply because he was an Olympic athlete who was supposed to grant the school reputation for high quality volleyball tutoring.

He is also willing to use the student council president Makoto Niijima to save his own reputation, by getting her to expose the Phantom Thieves' identities so he may grant her a high academic record and a university of choice. Unfortunately, this backfired as Makoto herself became a Phantom Thief and gave him a cheap excuse, and he was surprisingly weak willed enough to be convinced in stopping the investigation. Eventually being driven by despair during September, he attempts to contact the police to investigate his benefactors to no avail, ultimately ending up with him assassinated on the spot to frame the Phantom Thieves and merely made himself a petty obstacle and a useless lapdog in front of the ring leader.

Kobayakawa is the principal of Shujin Academy and spent years building up its notoriety, even employing a former volleyball Olympian, Suguru Kamoshida, as an instructor for the school. However, Kamoshida began abusing his students and athletes, sexually abusing the female athletes, and either disbanding other male athletic teams that may threaten the position of his team by force or subjecting his own male athletes to draconian torture-like training. Despite all this, Kobayakawa turned a blind eye to his actions, even hushing parental concerns and ultimately strong-arming the faculty and much of the other students into silence regarding the matter, all for the sake of preserving Shujin Academy's image provided by Kamoshida.

He appears on the day when the protagonist first arrives at the school on Sunday for registration. Kobayakawa assigns the protagonist to Sadayo Kawakami's class 2-D, which is also attended by Ann Takamaki and Yuuki Mishima, because it is the only class of second year with vacancy. He was forced by his benefactors into having the protagonist attend Shujin to keep a close eye on him. He came up with the excuse that reforming the protagonist during his probation period would further bolster Shujin Academy's prestige.

Shujin Academy becomes the center of attention by the media when the Phantom Thieves of Hearts target and reform Kamoshida, causing him to admit to his sexual and physical abuse of his students. This sudden shake up, along with the heist of Ichiryusai Madarame's heart, alarms both Principal Kobayakawa and his benefactors who force him into investigating his own students to find out if any of them are Phantom Thieves. He tasks the student council president, Makoto Niijima, into investigating the student body for potential suspects. After Makoto fails to produce results quickly, he threatens her with damaging her chances of getting higher education, causing her to lose faith in him. Even though Makoto does eventually discover the identities of the Phantom Thieves, she withholds that information and uses them as means to test their morals by targeting Junya Kaneshiro, whose heist is pulled off successfully, further bringing the Phantom Thieves into notoriety. Ultimately, not only does Makoto relinquish her role as his investigator, Makoto joins the Phantom Thieves herself (though she does not tell him) and states that she can get into a college based on her own merit, not by his word. After she leaves, Kobayakawa calls for someone he cringingly addresses as "Sir," apologizes and promises he will try to find out about the thieves.

After the story about Kobayakawa's true nature is leaked to a tabloid magazine, the SIU Director and the other conspirators decide that he is no longer of use to the Conspiracy. During the Shujin Academy's class trip to Hawaii, Kobayakawa is seen walking outside towards Police Headquarters, with the intent of exposing the Conspiracy. However, as he walks through the crosswalk, inflicted with a mental shutdown he suddenly stops in the middle as he clutches his chest and his eyes roll to the back of his head. Unable to leave the road, he is brutally killed when a large truck crashes into him.

Upon return from their class trip, the school is notified of their principal's demise. Though the death is ruled a suicide, rumors begin to circulate around the school that the Phantom Thieves were responsible, since Kobayakawa had little to show in motive for his sudden change in heart. However, due to his focus on the image of the school and not of the students themselves contrary to claims by the vice principal that Kobayakawa did care for the students and the public being blind followers of the Phantom Thief concept, many believe his death is well-deserved and a few students cheer for it. The vice principal takes over the school afterwards.

After Kunikazu Okumura's similar death during a live conference, the police found a Phantom Thief calling card in Kobayakawa's office, which was actually forged and planted by Goro Akechi as means to frame both his and Okumura's deaths on the Phantom Thieves. This would also serve as his opening for him to infiltrate and join the Phantom Thieves as a means to take out their leader and disband them.

When the Phantom Thieves infiltrate Shido's Palace, Shido's ally, a politician referred to as Ooe, reveals that Kobayakawa was assassinated because of his plans to expose the Conspiracy to the police in an attempt to save himself. 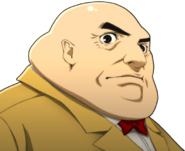 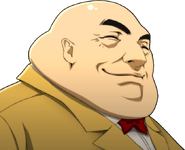 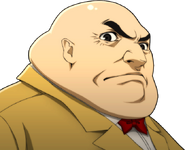 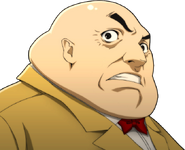 Kobayakawa in Persona 5 The Animation

Kobayakawa in the middle on the Persona 5 The Stage cover