Kitsune, also known as Okitsune and Kyuubi no Kitsune, is a demon in the series.

Kitsunes, also known as o-kitsunes or Kyuubi no Kitsunes ("the nine-tailed fox"), are fox yokai that are very prominent in Japanese folklore and mythology, who is also seen in China, and Korea. They were thought to be a type of shapeshifting yokai that was quite intelligent and sometimes a trickster. A normal fox is said to be able to turn into one, by gaining a tail each century of living and spiritual training.

They were thought to be a type of shapeshifting yokai that was quite intelligent and sometimes a trickster. There are several type of kitsune but mostly they are divided into two groups, the Zenko, which were benevolent and associated with the god Inari, and the Yako, which were malicious and mischievous. When a kitsune becomes old and powerful enough they become able to take human form. It was also thought that for each 100 years a kitsune lived it grew an additional tail; when gained the ninth one and became a kyuubi no kitsune its fur would turn golden or white and it would gain omniscient-like powers.

Records of the nine-tailed fox can be seen first in China. Known as a Huli Jing, (狐狸精) it is a benevolent, if not outright divine creature, and anyone who can encounter one and live to tell the tale is destined to become a lord or even the emperor. In Korea, known as Kumiho, (Korean: 구미호; Hanja: 九尾狐) these creatures wish to become human, often by stealing the life force of human males by transforming into a woman and seducing them. They are known to eat livers, or sometimes hearts, and have a supernatural ability to make humans less wise and discerning. Common folklore depicts them as more violent creatures that actively prey on male humans and corpses. In Japan, however, nine-tailed foxes are often depicted as evil and massively powerful entities, their power nearly equaling that of deities.

As for Okitsune, this an alternate name for Inari Okami (also known as O-Inari) - white fox gods of agriculture and industry. A pair of their statues with red bib are put before the shrine.

Kyuubi no Kitsune can be obtained by rank fusing Kudagitsune six times.

Also appears as Iron Kitsune, a kitsune whose body is made of iron, which can be bought for 20,000 coins. 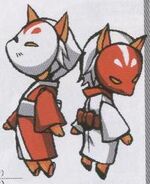