A New Charisma
Dark Mage (as a Mirage Master)

"Reincarnation"
"The Labyrinth"
"Give Me!!"

Kiria is an elegant and beautiful young woman with long turquoise hair that she styles in a braided ponytail with a few black hair pins on her hair strands and brown eyes.

In her street clothes, she wears an olive green jacket, a bright orange skirt that shows off the top of her underwear, torn black stockings and ankle-length heeled boots.

As an idol, she wears her hair in a ponytail and she wears revealing black/white outfits with long black gloves and thigh-high black boots, but she also has a variety of other outfits.

As a Mirage Master, she now has ankle-length hair that turns bright teal which is tied in pigtails two hair strands sticking out in front of her face, her eyes turn red and her face is obscured by a black mask where it covers her right eye. Her outfit becomes more armored, although it is still revealing with her midriff bared and her weapon is a combination of a staff and microphone stand.

Very protective of her private life, Kiria is a quintessential cool beauty who is often being very calm and serene though she can get standoffish and emotional on occasion. In her side quests, it's revealed she actually has a soft spot for cute things, such as her beloved plush doll Sir Gen. She is insecure about it as she knows it conflicts with her public image and is unsure of how to reconcile such contradictions.

Kiria is a chart-topping singer popular with young people. She simply goes by the romanized name "Kiria" as a singer and is a powerful Mirage Master. She’s also referred to as the "cool beauty," but not many people know her personally and her private life is a secret. She’s a senior to Itsuki Aoi and the others, often aiding them.

She's first seen in the prologue saving Itsuki, Tsubasa Oribe and Touma Akagi from an ambush and later invites them to her concert due to Tsubasa struggling with her lessons. When a Mirage attack happens she's quickly put out of commission protecting Tsubasa. After Ayaha Oribe (Tsubasa's older sister) is saved, Kiria officially joins the team.

During her side quests, Kiria confides in Itsuki that she actually has a soft spot for cute things. She tried to hide her affections due to fear of being mocked as her imposing image wouldn't gel with being cute. At first she tries to kill her love for anything cute by attacking cute Mirages in the Idolasphere, but finds she's incapable of doing so. Tharja chides Kiria for being so insecure and tells her that she should be herself and not be petrified by others' opinions of her.

In her third side quest she's booked for a duet with Tsubasa, but she is unsure of how she can act cute. Tharja then leads them to a pair of Mirage Golems she made called Bord and Cord which they'll practice charming. Unfortunately they're hostile and they're forced to fight them. Afterwards, she tells Tharja that she finds her to be her ideal partner, making Tharja chuckle gleefully before teasing Kiria about her attraction to Itsuki.

Kiria Kurono - Top of the Charts
After Enter-Kingdom, Kiria energetically continued her music career. Her powerful voice and grand performances continue to mesmerize her many fans, and she continues her busy life as one of the top artists in the country.

Kiria Kurono - A New Charisma
After Enter-Kingdom, Kiria's songs stayed faithful to her cool personality, and she remained a charismatic figure in the Japanese music industry. However, though it doesn't quite suit her public image, it's said she always carries around a small beat-up plush doll, inexpertly stitched back together...

Kiria Kurono - Cool or Cute?
"Chloe," the MC of the program "Absolutely Cute!" played by Kiria, became a huge hit, and Kiria made the decision to switch her image to a more hip and cute one. Now, surrounded by the cuteness she loves, Kiria seems happier than ever.

Kiria Kurono - A New Kiria
Kiria's new style of being "cool and cute" becomes popular across the world, making her an international star. The Japanese for the trend, "kakkokawaii," enters common parlance across languages and Kiria's voice continues to spread throughout the world.

Concept artwork of Kiria as a Mirage Master 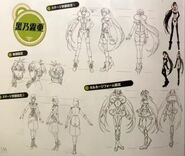 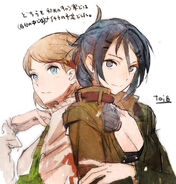 Kiria and Eleonora Yumizuru illustration by to18

Illustration artwork of Kiria and the main cast by toi8

Illustration artwork of Kiria, Itsuki and the main female cast by toi8

Kiria's poster for The Labyrinth.

Kiria and Tsubasa performing "Give Me!!" 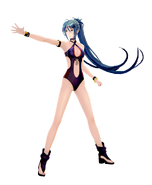 Artwork of Kiria in Fire Emblem 0 (Cipher) by Homazo.

Artwork of Kiria and Tharja in Fire Emblem 0 (Cipher) by Homazo. 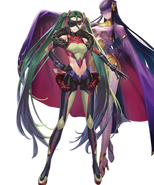 Artwork of Kiria from Fire Emblem Heroes by cuboon. 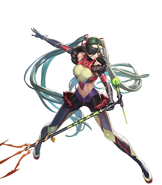 Artwork of Kiria and Tharja from Fire Emblem Heroes by cuboon. 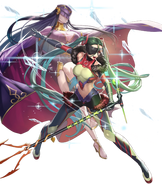 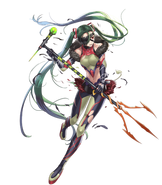 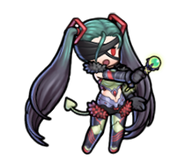 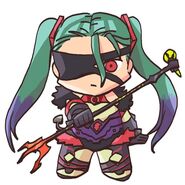 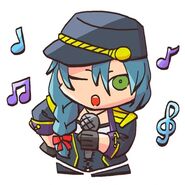 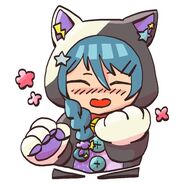