Kirk Thornton
"Now listen up! This town is miles away from your big city of perverts and assholes, in more ways than one. You better not even think of getting involved with the girls here, let alone abusing them! But what do I know... it's not like the old days. Even here, kids grow up so damn fast. Every time I turn my back, you're fooling around on those damn phones, checking your life-journals and your my-places..."
—Kinshiro Morooka to his class, Persona 4

Kinshiro Morooka is a character in Persona 4. A teacher in Yasogami High School and the protagonist's homeroom teacher. He is given the nickname of "King Moron" by students.

Morooka is middle-aged, with straight black hair in a bob-cut, hazel eyes and buck teeth. He wears a dark navy suit with pinstripes, a white collared long-sleeved shirt with a yellow-and-light orange checkered tie. In Persona 4 The Animation, he wears a plain yellow tie.

A snobbish, judgmental and archaic man, Morooka is known to express his hatred towards what teenage culture has evolved into, and scorns his students for being dull and obsessed with technology. In reality, Morooka is all bark and no bite; he seems to just disdain pop culture under the premise of it contaminating his rural culture and nothing else, when he hypocritically participates in it, being a closet fan of Rise Kujikawa. Despite his negative attitude towards his students, Morooka is said to occasionally give heartfelt counsel to the female members of the student body, in which he spoke to them in regards to their potential future career paths.

Morooka is first seen during the protagonist's first day attending Yasogami High. The protagonist enrolls into Class 2-2, in which the homeroom teacher happens to be Morooka. He instantly makes snide and inappropriate remarks against city people and spews out a repetitive rant about how entitled city folk are.

During the school's camping trip, Morooka, acting as his class' chaperone, took his job of supervising his students lightly. He takes advantage of his position, and orders the class to return to their tents earlier than scheduled, so that he might drink with the other teachers.

The protagonist, Yosuke and Kanji gossip about Morooka in their tent. Kanji reveals Morooka has threatened to expel him countless times, and often refers to him as "garbage."

Later, after a news story documents a teen idol's return to her home town of Inaba while on hiatus, Morooka expresses disgust towards the event, and rants on about how pointless the whole news piece is. He chastises his students for getting excited over a "scatterbrained idol." However, through the gossiping of students, it is revealed that Morooka is actually a closet fan of Risette, and is known to have bought her pin-up books and magazines.

Morooka is, however, killed in a similar fashion as the bizarre murder cases in Inaba, a fact that greatly confuses the Investigation Team. They had deduced that the victims in the Midnight Channel are those who appeared on TV; however, Morooka was never shown on the TV, nor did he appear on the Midnight Channel at any time prior to his death. To add to their confusion, Teddie also exclaimed that he did not sense any human presence after the Team left. In reality, Morooka was killed by Mitsuo Kubo, a copycat who merely wanted fame by claiming himself as the killer of Inaba. Mitsuo bludgeoned him to death and then hung his body upside down from a water tower, and Morooka was never thrown into the TV in the first place. He is later replaced by another teacher, Noriko Kashiwagi, who is nonetheless still an unpopular teacher in a different regard. 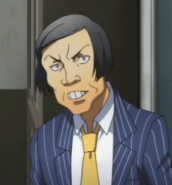 Kinshiro Morooka in Persona 4 The Animation

Morooka is furious at Yu and Ai for ditching school.