King Frost is a recurring demon in the series.

It is also just as likely that it's a pun about the fact that Jack and King are both playing card ranks.

Unlike a regular Frost and despite his appearance, King Frost is ruthless and his power unyielding. He is not friendly and likes to exercise his status as a king, appreciating those who praise him and even considers his summoners to be subjects as well.

King Frost can only be acquired through a triple fusion of three different Jack Frost variations. He regularly appears as an event boss during the Christmas period. His crown, padlock and wand all appear as player equipment.

King Frost can only be encountered using the Enemy Search feature of the Demonica, and is one of the special fusions in the game, consisting of Jack Frost, Black Frost and Frost Ace.

King Frost can only be summoned through a special fusion of Jack Frost, Frost Ace and Black Frost. He can teach Flynn the Cold World and Concentrate skills through his Demon Whisper.

King Frost is a boss who took over the spring in the Fairy Forest. He learned about a hidden treasure kept secret there from a Preta from a unknown organization. He hoped to use the control of the spring water to make the other fairies obey him, but Nanashi defeated him. King Frost's body melts to turn him into Jack Frost and he concedes defeat, knowing when to quit. He admits he also doesn't mind his current state as he is quite dashing as a Jack Frost.

King Frost's battle introduces two things: first, the Assist Gauge that causes all battle partners to team up and pile on an enemy, thereby skipping their turn; also, that several moves have Smirk-related additional effects and bosses are not afraid to use them. While King Frost's first turn will always be skipped due to the Assist Gauge automatically filling at the start of the battle, this is only a mere reprieve before he commences attacking.

King Frost has a +4 bonus to his Ice skills, making it very difficult to outlast his attacks without Ice resistance. The issue behind the fight is his use of Smile Charge at the end of his turns which will grant him a guaranteed Smirk. Not only will it neutralize his weakness to Fire and drag out the battle, but it also causes his signature move, King Bufula, to land a critical hit on the whole party while lowering their defense.

One of the best demons to bring to the fight is Napaea; she eventually resists Ice while innately learning Agi without any penalty to strike King Frost's weakness. Getting an Angel also helps as she eventually learns Magaon to cancel King Frost's Smirk. Additionally, Physical or Status skills that manage to inflict a negative status will remove the Smirk as well. Navarre is an excellent battle partner option as he gets access to Rakukaja to offset the additional effects of King Bufula. Bring your hardest hitters, as the battle will quickly degenerate into a damage race between the boss and the party, unless King Frost randomly wastes his Smirk on a normal Bufula.

Once Nanashi reaches level 30, he can fuse King Frost with a special fusion of Jack Frost, Pyro Jack and Jack the Ripper. He can teach Nanashi the Bufula, Ice Breath, Megaton Press and Critical Eye skills through his Demon Whisper, but his King Bufula skill cannot be passed on in any way. King Frost benefits from learning Ice, ailment and support skills.

"The king of snow who rules over an infinite number of Jack Frosts.
He has the power to freeze the entire world but is unaware of it due to his rather naïve personality."
—Shin Megami Tensei V lore

King Frost appears in a warehouse guarding a pile of frozen fish. He was originally a Jack Frost who was saved by a human, although the human died sometime later and he evolved into King Frost. The protagonist encounters him while completing the "A Wish for a Fish" quest. King Frost attacks the protagonist, believing they are there to take what is his. He is ultimately defeated and the protagonist has the option finish him and take the fish or let him go. Regardless of which option is picked, he becomes available for fusion upon defeat. King Frost can be fused with a special fusion of Jack Frost, Pyro Jack and Berith and is one of the demons required to fuse Black Frost.

Should the protagonist attempt to speak with a Jack Frost while King Frost is in his stock, King Frost will interject with a special conversation, with the conversation causing the Jack Frost to run away and the battle to end.

King Frost appears in the first Room of Trials at the Corridor of Time. Defeating him is necessary to obtain the Bronze Manji.

King Frost appears in Persona 3 as a special Persona. In order to fuse him, the protagonist has to obtain the "Sugar Key" item (a reference to Digital Devil Saga: Avatar Tuner) by completing #22 of Elizabeth's Requests.

King Frost is the second Persona of the Emperor Arcana and can be summoned by fusing Lilim and Anzu together once the protagonist reaches level 22.

King Frost first appeared in Episode 12. Yu Narukami summoned him as one of his attempts to attack Shadow Mitsuo. King Frost was used to shoot a blast of Bufula at Shadow Mitsuo. However, this attack was blocked, and Yu was forced to use another Persona. King Frost is also the Persona that represents the bond between Yu and Kanji.

"The king of snow who rules over an infinite number of Jack Frosts. He has the power to freeze the entire world, but is unaware of it due to his naive personality."
—Persona 5 background

King Frost is the seventh Persona of the Emperor Arcana and can be found in Shido's Palace and in the Sheriruth area of Mementos, with the title "Monarch of Snow." He is one of two Personas to learn the Null Despair skill and one of four to learn Ice Amp. When itemized with an Electric Chair Execution in the Velvet Room, King Frost will yield the King Frost Cape unisex armor, which has 140 DEF, 16 EVA and grants the Reduce Ice dmg (high) effect to the wearer. King Frost is one of the Personas required to summon Black Frost through advanced fusion.

"The king of snow who rules over an infinite number of Jack Frosts. He has the power to freeze the entire world, but is unaware of it due to his naïve personality."
—Persona 5 Strikers background

King Frost returns as the ultimate Persona of the Emperor Arcana and one of the game's eight unlockable fusions. To unlock the ability to fuse King Frost, the protagonist must accept Oracle's request "Make Way for the Frozen King" in the Sapporo Jail and defeat King Frost to obtain the Key Item "Giant Snow Crystal." King Frost will be assisted by summoned Jack Frosts and more powerful Mocking Snowman Shadows during the battle.

A level 65 King Frost is required for the fusion of Black Frost.

Replacing Hel as the new Tyrant of the Ice Expanse and leader of the Frost Clan, King Frost is the more benevolent leader of the tribe. Seeking to aid Masaki Kuzuha when he asks for a cure to the Dark Slumber, he has the doctor, Dian Cecht, give it to Takaharu Ougi. Later, he will be taken hostage by the angels of Tenkai, who seek to turn his castle into the stronghold they will use to invade all of the Expanse. He is grateful to Masaki when he frees him.

"King of the snowmen whose clothing is designed to maintain cold temperatures."
—Demonary, DemiKids

Known as King Icy, he rules over Frostville and the Ice Temple. In Dark Version, he is taken hostage by the Imperium's Harborim, but is saved by Akira. King Icy is obtained by ranking up a Jack Frost ten times through fusing ten consecutive Jack Frosts together. Since ranking up is not available in Light Version, the only way for Jin to obtain a King Frost is through link trade. After beating the game, King Icy will move from his throne so Akira and Jin can access Lucifer Frost, who the King can sense.

"This is the King's castle, HO. The King decides the HEE code. Those who disobey are sentenced to HEE HO death."
—King Frost before his boss battle

After Serph and company defeat Mick the Slug, King Frost takes the opportunity to reoccupy Coordinate 136 with his own demons. Upon reentering the castle, Serph encounters two Pyro Jacks fiddling away at a treasure chest. Having tried their luck, the Pyro Jacks turn to the party to find a suitable key within the castle promising that the treasure within is for Embryon to keep. It was, however, a lie.

After the party retrieves the correct key, the Pyro Jacks run off with the treasure to present it to their king. To get back their spoils, the party ventures to the top of the tower to find King Frost sitting on the platform above the bed in the Princess' Bedchamber. Declaring that all possessions belong to him, King Frost decides to smite the party for their insolence. After a harsh struggle combined with the forces of his minion Jack Frosts, the party defeats King Frost and obtains the Ice Crystal, which unlocks the King Mantra.

Upon defeating him, the party can obtain the Hee-Ho Karma ring in the sequel, which grants the wearer immunity to Ice-based attacks.

"The king of snow. He is a snowman large and proud, ruling and commanding the infinite number of Jack Frosts. King Frost retains the ability to freeze the world over entirely but as are the Jack Frosts, he is a bit innocent and naive."
—Shin Megami Tensei: Liberation Dx2 compendium 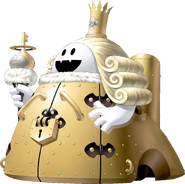 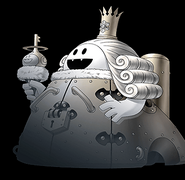 King Frost as he appears in Persona 3 FES

King Frost as he appears in Card Summoner

The King Frost Fusion Spell as it appears in Persona 2: Innocent Sin

King Frost as he appears in Devil Survivor 2

King Frost as he appears in Persona 4: The Animation

King Frost as he appears in Shin Megami Tensei IMAGINE

King Frost as he appears in Persona 5 Royal

King Frost as he appears in Persona O.A. 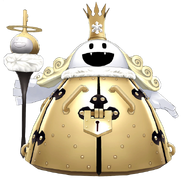 King Frost as he appears in Persona O.A. (No Background) 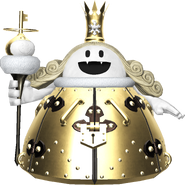 King Frost in Puzzle and Dragons