Persona Q: Shadow of the Labyrinth
"Now then... this might hurt juuust a bit, but it'll be alll right..."
—Kind Doctor during battle, Persona Q

Kind Doctor is a boss from Persona Q: Shadow of the Labyrinth.

Kind Doctor is the guardian of the Evil Spirit Club, joined by the Calm and Caring Nurse. They are deployed by Chronos to guard an item. The three are performing an operation on a Shadow before noticing the party, with the Kind Doctor crushing the Shadow's head before turning his attention to the Persona users in order to begin an operation on them.

The Kind Doctor's in-battle monologue sounds as if he is progressing with a patient's checkup, preparing for an operation, and gradually starting to fail said operation. He declares the operation a failure on defeat.

The chest guarded by him contains a lock of hair. His dialogue near the end of the fight suggests that he is based on a doctor who performed surgery on Rei when she was alive, whose haunting words upon defeat suggest that she died.

When defeated, it drops the key item Broken Gauge. Broken Gauge is used to create the Spirit Ring accessory, which allows the wearer to use Power Charge.

The battle functions similarly to the battle with Shadow Kanji in Persona 4, with the flanking assistants providing buffs and healing to the boss while inflicting Binds on the party. Kind Doctor mainly performs Physical attacks, so getting a Strength Bind or Fang Smash on him will sharply weaken him despite the Caring Nurse's buffs. If he prepares a Power Charge and is unbound, prepare to defend, as he might follow with Drastic Measure which is likely to take out one party member.

Like the other bosses before it, Kind Doctor and his Nurses are susceptible to ailments. Poison will not only speed up the battle, but also distract Calm Nurse into applying Diarama every now and then to the Doctor instead of spreading ailments among the party.

Having both the P3 and P4 heroes in the party will be helpful, as they can dispel the Caring Nurse's buffs and debuffs with Dekaja and Dekunda.

Official Artwork of Kind Doctor with the Nurses. 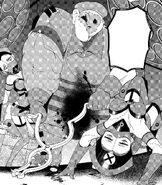 Kind Doctor in P4 Side.