Kikuri-Hime or Princess Chrysanthemum, also known as Shirayama-Hime, is a demon in the series.

Kikuri-Hime-no-mikoto (菊理姫 or 菊理媛命) means "Priestess Chrysanthemum," which is her symbolic flower and interactively associates with lamentation at death, is an agricultural and the harvest goddess of Kaga Hakusan in Japanese mythology. . She is briefly mentioned in Nihon Shoki that after Izanagi was driven out of Yomotsu Hirasaka (Shinto Netherworld), Kikuri-Hime mediated on behalf of Izanami so that the husband and wife could engage in a debate in their confrontation in Yomi. The exact content of this debate is not recorded, although there has been much conjecture. It is the actions of Kikuri-Hime that established the duty of Miko (Japanese priestess) of communicating with the netherworld on behalf of the living one. She has also been known as a goddess of matchmaking since ancient times.

At an unknown point of history, Kikuri-Hime has been merged with a separate goddess worshipped in the shrine of Hakusan (White Mount), Shirayama-Hime-no-kami (白山比咩神), "Princess White Mountain." Today, the temple enshrines Kikuri-Hime (who is now treated as Shirayama-Hime) alongside Izanagi and Izanami.

"Origin: Japan. An agricultural goddess of Kaga Hakusan. Legend has it that she mediated between Izanagi and Izanami in their confrontation in Yomi. She has also been known as a goddess of matchmaking since ancient times."
—Shin Megami Tensei A-Mode DDS dictionary

"The goddess of life in Japanese mythology. She once mediated between Izanagi and Izanami during their confrontation in Yomi, the land of the dead."
—Shin Megami Tensei III: Nocturne compendium

"A goddess of agriculture and the harvest in Japanese mythology. She is also said to be a goddess of love and marriage. She is the shrine goddess of Hakusan-Hibai Shrine in Ishikawa, Japan, where she has been revered for centuries as the "mother goddess of life."
When Izanagi fled the underworld of Yomi and was pursued by Izanami, Kikuri-hime is said to have reconciled the two at Yomotsuhirasaka. The word "kikuri" means "bind fates together," and Kikuri-hime's name is said to derive from her role as mediator between Izanagi and Izanami, through which their fates were bound together.
Kikuri-hime is also sometimes seen as a goddess of Yomi, ruling over death and rebirth. She is well known throughout Japan, with over 2,700 shrines dedicated to her, and is revered as one of the most powerful deities."
—Shin Megami Tensei IMAGINE compendium

Kikuri-Hime can be acquired through fusion and as a hacked chip instance reward. She acts as a boss within Ichigaya Camp's bronze-level instance and reappears as a nightmare variant in the basement floors of the gold-level instance.

"The goddess of Shirayama, also called Shirayama-Hime.
The deification of a maiden who relayed Izanami's words. She once mediated between Izanagi and Izanami during their confrontation in Yomi, the land of the dead. Since she is the goddess of love and marriage, she was thought to be named for "kukuri," to bring people together."
—Shin Megami Tensei IV compendium

Kikuri-Hime can be encountered in Ginza. She can teach Flynn the Tetraja, Me Patra, Diarama and Recarm skills through her Demon Whisper.

Kikuri-Hime can be found throughout Ginza. She can teach the Sexy Dance, Diarama, Me Patra, Recarm and Tetraja skills through her Demon Whisper. Kikuri-Hime benefits from learning healing, force and support skills.

"The goddess of life in Shinto myth. She once mediated between Izanagi and Izanami during their confrontation in Yomi, the land of the dead."
—Persona 5 background 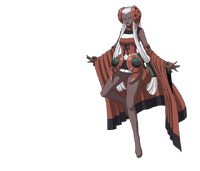 Io Nitta summons Kikuri-Hime at the end of Monday against Merak to deal attacks to the flyer, blasting it with pink magic under heavy cover of the JP's members' Jambavans until it was hit by one of Merak's small energy beams, knocking it out of the fight.

Io later uses Kikuri-Hime to fight off multiple Legions in Nagoya before Hibiki's Suzaku comes in to destroy the rest of them. On the same day, Io also uses her to fight Phecda in JP's Nagoya headquarters. Kikuri-Hime manages to do some damage before Io becomes exhausted, and is later destroyed by Phecda's energy beam when it splits into two. She is last seen in battle against a Megrez bud, where it once again uses its energy blasts to damage the Septentrion's shell in a join effort with Byakko.

Upon a glance at Io's final demon roster, Kikuri-Hime seemed to have disappeared. Io summons Kikuri-Hime one last time in the last day to protect Hibiki from Nebiros. After her defeat, Io quickly summons Lugh to continue the fight.

"The goddess of Shirayama, also called Shirayama-Himie. She mediated the well-known between Izanagi and Izanami in Yomi no kuni, the land of the dead. Soon after the two made up, and conceived Susano-o and Amaterasu. She is the goddess of love and marriage, also known as "Kukuri" which means to bring people together."
—Shin Megami Tensei: Liberation Dx2compendium

Persona Q: Shadow of the LabyrinthEdit

Retrieved from "https://megamitensei.fandom.com/wiki/Kikuri-Hime?oldid=380415"
Community content is available under CC-BY-SA unless otherwise noted.