"His love of food has made him physically strong, but emotionally fragile."
—PSP introduction

Kenta appears as a St. Hermelin High student, who in the middle of the SEBEC crisis was visited by Philemon and granted a Persona. That night, he sneaked into the school's cafeteria in order to sate his hunger. Vice Principal Hanya approached him and pelted him with insults, leading to him losing control of himself and ordering his Persona to engage Hanya.

His Persona, Akuma, burst as a monster out of Kenta's chest and knocked Hanya out, and then engaged the school's Persona Users. His outburst caused the awakening of Yuka Ayase's Persona; she later explained Kenta's outburst was partially her own fault due to a rather extreme rejection some time earlier, but she did not seem to be overtly worried about Kenta. He eventually survived the crisis, aware on some level of his Persona.

In the Snow Queen Quest, he is trapped inside of Nemesis Tower and tortured alongside Tsutomu Kurouri by Michiko Matsudaira due to being "ugly". His punishment is drinking milk, as he is lactose intolerant.

"A graduate of St. Hermelin High. He's a top-ranked door-to-door salesman whose impressive record is rumored to be due to his Persona."
—His introduction, Persona 2: Innocent Sin

Kenta now works as a salesman/rumormonger. He claims that his Persona has helped him advance his career, but his colleague, Reiji Kido, who refuses to abuse his Persona ability (and whose Persona's aura causes intense fear instead of desire), is not so lucky, and they occasionally meet so Kenta can give Reiji some business advice. Kenta is a fish connoisseur and is always seen eating at the Gatten Sushi bar, which is owned by Eikichi's father.

"A graduate of St. Hermelin...A successful salesman who knows a lot about rumors. His Persona seems to have helped his career."
—His introduction, Persona 2: Eternal Punishment

Kenta Yokouchi (a.k.a. Rumormonger Chunky) can be found at the Gatten Sushi restaurant. Kenta's Persona is alluded to when visiting the restaurant early on where the party comments on the strange atmosphere, with surprised restaurant-goers saying how Kenta knocked out an angry businessman in one punch. He is proud of his title as the Baron of Sushi. 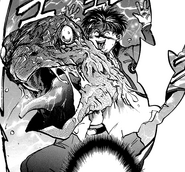 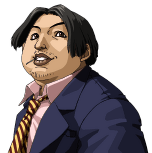