Kenji Nojima (Drama CDs, and Persona 3 The Movie)
Kenji Tomochika is a non-player character from Persona 3.

Kenji has short brown hair and dark brown eyes (grey eyes in Persona 3 The Movie). He wears the standard school uniform of Gekkoukan High, and on the Sundays or when spending his free time with the protagonist, he wears a yellow jacket with a white shirt underneath and a black v-shirt over the top, green camouflage pants and white shoes.

His personality is similar to Junpei's, but he is only interested in older women. He has a friendly, calm, and a little more mature attitude.

The first Social Link the protagonist cultivates. He is interested in older women and has a crush on one of his teachers, Emiri Kanou.

For the better part of conversations with Kenji, he will be lost in his own world, thinking that he has actually established a relationship with his teacher. He panics when this so-called "relationship" is exposed, and starts to worry when Ms. Kanou won't return his calls after rumors spread that she was being forcibly transferred to Kyushu.

In reality, Ms. Kanou was making the trip of her own free will, soon to be married to her actual fiancé. Realizing that his love was one-sided from the very beginning, Kenji cries in defeat, but somehow pulls it together because of the protagonist's support.

In one particular Special Event (Cultural Day Clean-Up) he and the protagonist put on an impromptu Manzai comedy show for their peers, with him insisting on becoming the Boke (funny guy) and the protagonist playing the Tsukkomi (straight man). If his Social Link had been reversed prior, the scene will still happen as normal and the relationship will automatically be mended afterwards. He appears to be friends with Kazushi Miyamoto, whom he sometimes pokes fun at because of his being a total square and a sports freak. He also seems to get along with Junpei as well, and it's hinted that he may be somewhat attracted to Yukari despite preferring older women in general.

Kenji makes a brief appearance in Junpei's ghost stories series, Believe it or Don't. He was referred to as "K". Another cameo of Kenji occurs when he appears playing a card game with Yukari, Junpei and Ryoji. They bet that whoever loses the match must strip naked for a magazine article in front of a train station in Kyoto.

In the movie, Kenji is first seen in Game Panic getting along and have a little conversation with Makoto. However, this conversation gets cut short and he started playing an arcade game with Junpei instead. During the end of the mid-exams, he and Kazushi comforted Junpei after he failed the mid-exam.

He along with Kazushi appear briefly at school in hallway during the summer. 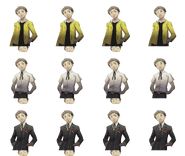 Kenji in the manga adaptation of Persona 3

Kenji in Persona 3 The Movie

Kenji with the group