Atomu Mizuishi
"Today's world has too many things that are more dangerous than a boxer's fist."
—Keita Wakui, Devil Survivor 2

Keita Wakui is a character from Devil Survivor 2. He is a student in Osaka High and is a member of his school’s boxing club.

Keita's appearance is of a middle schooler like young student with gray swept-back crewcut, and gray eyes. He wears a school uniform with red shirt underneath, white shorts with charcoal gray lines and red sneakers.

Keita is unfriendly and doesn't like to get close with others, being a lone wolf by choice. Even though he typically ignores cries for help, he usually assists others anyway using his amazing strength to accomplish tasks by his lonesome. He is obsessed with getting stronger, noted by how he is constantly training on his punching bag or how he has a thick rivalry with strong opponents.

He seems to be at odds with most of JP's, especially Fumi, Hinako, Jungo and, to an extent, the protagonist. Keita mentions that he dislikes women from Osaka.

In the animated version, Keita is shown to be much nicer and a typical tsundere character, he blushed out of embarrassment and tried to hide it by outwardly denying whenever Hibiki showed concern and gratitude. He even saved Io and Hibiki, though in the latter's case comes at the cost of his own life. 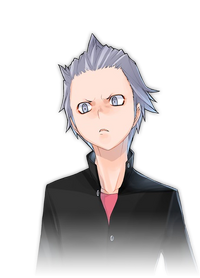 Keita used to be a street brawler who liked to challenge any thugs on the streets to become strong. His strength earned him a quite fearsome reputation known as "Raging Wolf of Minami." However, he stopped and instead pursued boxing, believing it's easier for him to become stronger that way.

Keita is brought to meet the party to show them around Osaka, but instead wanders off on his own, telling the party to meet him at the Bickman at 14:30 so he can show them to the headquarters. Shortly after, the protagonist receives a death clip from Nicaea, showing his death as he falls down a large flight of stairs. After some asking around and meeting up with Hinako, they determine that the location of the death clip is the Bickman - their meeting point.

If the protagonist arrives at Bickman before or at 15:00, the party can arrive in time to assist him as he fights off demons, otherwise the death clip comes true as he is pushed down the stairs by a Waira. Keita joins the party afterwards.

After the fight with Merak, as the protagonist's party prepares to leave Osaka, Keita turns up, giving the protagonist a souvenir and tells them that one of them has to go to Nagoya to deliver supplies.

In the Meritorious ending, Keita looks on as a civilian utilizes her authority to quell a dispute.

In the Triumphant ending, it is revealed that Keita becomes a famous boxer to the point that he is seen in newspaper articles and helps Jungo to sell chawanmushi with his popularity to attract customers.

Keita is first introduced by Hinako after Hibiki's group arrives at Osaka branch's secret subway train. However, he refuses to join the search party because he planned to hunt demons at the time. He is seen later attacking demons and destroying a cell phone when he sees a flying demon in the distance. He decides to follow the demon's trail.

Keita is then shown inside the abandoned Festival Gate at the same time JP's defense systems gets hacked. He nearly picks up a call, which would have ordered him to evacuate (and possibly avert his death clip), but is interrupted by an attacking Gozuki and drops his phone. He immediately grabs it back and summons Berserker to attack the demons. During batle, Keita gets knocked down by a force and is about to fall on a sharp iron before being saved by Hinako's Lilim. He then joins up with Hibiki and Hinako in holding off the demons. When Io gets thrown off the top floor of the Festival Gate by Botis, Keita begrudgingly orders his Berserker to catch her, saving her from death. Hibiki expresses thanks for this, to which Keita blushes and orders Hibiki to focus on task.

After Hibiki and Keita seemingly defeats Botis, and Daichi destroys the hacker's (who happens to be Fumi Kanno) PC, Botis suddenly reappears behind Fumi and knocks Berserker out. Keita, realizing that Botis is about to attack with Ziodyne, pushes Hibiki out of the area of attack. Keita gets thrown a considerable distance by the force of the attack, and dies at the bottom of the stairs as his death clip has predicted, much to the grief of Hibiki and the others who tried to prevent it.

Hinako later adjusts Keita's body and closes his eyes to make him appear at peace. However, before the crew could do anything else, they were quickly escorted by JP's workers to fight Merak, leaving Keita's body laying silently in the same place and position. His death would become a basis of Hibiki's attitude towards the life of innocent people against Yamato Hotsuin's methods in later episodes.

When the world had been reset to the beginning by Hibiki's wish, Keita was last seen being interviewed by the media about his goals, to which he replied he wanted to win a gold medal in his boxing match.

Keita's Fate route focuses on his views on friendship and his history with his parents, but the events may vary depending on whether the player saved Jungo or not.

If Jungo is alive, most of Keita's Fate events involve him getting in arguments with Jungo, who views friendship in a different light. Keita tells Jungo that he finds friendship useless as his father had a "friend" who betrayed him and left a large debt to his name, which ultimately resulted in his parents disappearing. Jungo soon reveals that he also has a parentless background, but had the support of those around him in the orphanage to keep him going. Despite Jungo's persistence, Keita refuses to accept his view on friendship.

At the climax of his route, Hinako comes running to Keita to request for help, as she and Jungo encountered a large number of demons but cannot hold them off well enough. Keita brushes her off while the protagonist goes to help. As the three of them finish off the demons, another one appears just outside Jungo's notice, ready to attack. As Jungo prepares himself, Keita appears from behind, effortlessly defeating the demon. Afterwards, he realizes a new boxing technique from that experience, and admits that supporting his teammates is not as bad as he had convinced himself.

With some resemblance to Misaki Izuna from Devil Survivor, Keita takes a bit of a middle ground between Jungo and Hinako, having good Agility and Strength and average Vitality. This allows him to be respectably fast without being too fragile. His Magic, however, is non-existent, greatly restricting him to physical attacks and some Curse spells only.

Due to his high Strength and middling Agility growth, Keita is more suitable to use Deathbound and Berserk than Multi-Strike or Multi-Hit for damage against opponents in general. As Multi-Strike and Multi-Hit are affected by both Strength and Agility, his mediocre Agility leads to less damage and fewer hit counts, resulting in slightly less damage compared to Daichi and Hinako. However, at later levels, Keita eventually invests more in Agility, making him suited to using any of these skills. Additionally, due to his respectable Agility and Vitality at most levels, he is one of the most viable and stable users of the skill Rage Soul.

Vs. Osaka, as an Enemy[edit | edit source]

Keita's skills here focus on snatching your Extra Turns via Full Might and Extra Bonus. Fortunately, those Extra Turns can be easily stolen back by hitting his demons with Force attacks, which they're weak to.

Keita sports a vicious combo of Rage Soul + Phys Amp + Attack All to practically level any team that has no resistance to Physical attacks, and his Zouchouten lets him have a second round against anything that somehow managed to survive his attacks. While his defenses are lacking, he makes up for it with regeneration provided by Life Lift. Equip Wall or cast Tetrakarn to make short work of him, since he himself holds no protection against his own reflected attacks.

"You moron... It's obviously not possible...
Are you gonna just let the world die, along with your friends? You want that?"
—Shadow Keita upon spawning

Shadow Keita is fought solo, being on a team all by himself.

Like many others before him, Keita comes with his own demons and must survive the battle in the event. The party also has to chase down and defeat Spica buds in the process. His team, at the very least, gives him reasonable survivability against Spica.

Retrieved from "https://megamitensei.fandom.com/wiki/Keita_Wakui?oldid=393782"
Community content is available under CC-BY-SA unless otherwise noted.