Ari Rubin (Overclocked)
Keisuke Takagi is a character from Devil Survivor. He is Atsuro Kihara's old friend from school.

Keisuke has straight brown hair, matching colored eyes and oval shaped glasses with black frames. He wears a brown and yellow dress shirt that is unbuttoned (also untucked), under a yellow polo shirt, with black pants and shoes.

Keisuke is a very calm and thoughtful person. However, he hides a very extreme judgmental side towards people who commit despicable acts such as bullying and using their power for selfish desires. Once Midori is predicted to be executed by humans in a Laplace Mail, Keisuke gets furious and tries to create a world where people will have to be judged by Yama, the judge from Hell, a demon he summoned from his fervent desire for justice. He uses Yama's power to enforce his will, allowing Yama to kill humans if he deems their crimes warrant death. If the player makes the correct choices, Keisuke can be stopped.

The protagonist, along with Yuzu and Atsuro, meets Keisuke shortly after the Lockdown begins. Keisuke introduces himself to the group, but comes off with a somewhat quiet demeanor, something that greatly surprises Atsuro. After Keisuke goes away, Atsuro explains that he used to be the kind of person that would protect people who were bullied by others, and that he had no idea why his personality had changed so much in such a short time.

Keisuke is available for recruitment on Day 2 after saving him and Midori Komaki during a battle. He is very protective of the Cosplay star, and as such, he constantly tries to convince Midori to quit pretending to be a hero because of how she's constantly flaunting her demons and eventually giving civilians a negative view of demon tamers. The next day he leaves the party to save Midori, who apparently is in danger of dying herself. But afterwards, he is more focused on "judging people" with Yama, the judge of Hell.

Keisuke eventually kills a member of a gang known as Shibuya Daemons, which angers its leader, Kaido, who seeks revenge in the name of his fallen friend. If the player does not meet and convince Keisuke to change his ways and cease to cast blame on others during the events of Day 4, he will be killed by Kaido's demon, Pazuzu. If he is saved, however, he can be recruited again. Convincing Keisuke to change for the better also unlocks the demon Yama, allowing him to be fused in the Cathedral of Shadows.

If Keisuke has survived for long enough, he will reveal his reasons for changing his personality and his mind so much. When he began attending high school, he continued to protect his classmates from bullying; however, one day the classmates he'd protected changed sides and began to bully him instead. This was the catalyst for his cynical personality and the appreciation for someone as simple as Midori, who held an exceedingly black-and-white, innocent and childish view of the world.

According to the material collection, Keisuke sees a bit of his younger sister in Midori. His sister was the one who encouraged Keisuke to carry on while he was being bullied, so he can't help but see Midori as someone he has a duty to protect.

Keisuke will only make an appearance if he is in the player's party, where he escapes with the protagonist and humanity loses their free will as consequence for disobeying the angels.

Keisuke, along with Midori and Yuzu, oppose Naoya's plan to make the protagonist the King of Bel and leave the party. Upon completion of Naoya's route, Keisuke is seen in the epilogue as the protagonist begins to wage war with the angels, and hopes that the protagonist is safe and that the new world would not be ruled by power.

Keisuke will stay with the group, supporting the protagonist's decision to become Messiah, with many positive remarks, to show how much he supports the player's decision.

Keisuke remains with the group regardless of any events in the route. In order to secure this route, the player must save him on the 5th day or Atsuro will call off his plan.

Keisuke remains with the group regardless of any events in the route.

Keisuke can be seen speaking with Shoji. After a conversation, he will rejoin the party.

Keisuke does not appear at all in this ending.

Keisuke is supportive of the Messiah's goal to reform humanity and more accepting of the angels' extreme judgments.

Keisuke, or a character that resembles him, makes a cameo appearance as a JP's agent in Devil Survivor 2 The Animation.

Keisuke has a poor stat distribution, but is useful mainly for his Agility, which starts higher than the rest of his stats. He also gains some Strength and Magic growth, although these stats are overall low compared to fellow Magic users early- to mid-game. Consequently, his Vitality becomes his dump stat, making him quite easy to defeat if his team cannot defeat opposing demons in time. Additionally, his MP growth is under average for a Magic user, making Yuzu or Midori a more practical choice in most battles on most Days.

Overall, his stats makes him best for single-target attacking, as single-target spells such as Zio or Ziodyne (rather than Elec Dance or Maziodyne) allow him to safely grab extra turns without hitting incorrect targets or, more importantly, compromising his MP. Alternatively, he is a decent character for inflicting status, as his high Agility growth grants him early access to such skills, while also allowing him to cripple enemies before they can even make their move. To compensate for his lack of endurance and MP, a Surge skill can be used. His movement range is 4. With 36 Agility at max level, he becomes one of the fastest characters in the game, rivaled only by Izuna.

Keisuke is found here defending Midori from demons, and must be assisted.

As Midori is about to escape from the map, Keisuke intervenes and brings along Yama. Defeating either Yama or Keisuke here will force him to retreat.

Keisuke once again summons Yama to punish cops who are misusing their COMPs. However, the goal for this battle is to defeat Yama — if Keisuke is defeated, a game over will be issued. 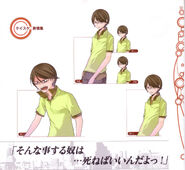 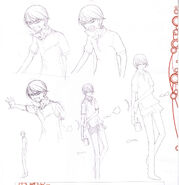