Kazuya was Naoya Toudou's older twin brother who died when he was four. He reveals himself to the main characters during the fight with Chisato Kasai where he pretends to be Naoya only to turn on the party. When Naoya finally arrives, he introduces himself. Afterwards, in the Lost Forest as Naoya is troubled with how vague his memories of that time were, Kazuya reappears to attack him, separating Naoya from his friends. Naoya, unable to call his Persona, is quickly overpowered by the overly aggressive Kazuya who attempts to kill him, but was saved by Mai.

He becomes a reoccurring villain working in conjunction with Aki, but sometimes making a shift to support the main characters - such as helping Eriko Kirishima when she is hit with Makajam, even though he is still hostile towards Naoya and does not stop to try to sway him from his path.

After defeating Kandori, Kazuya and Aki shows the memory when their mother mistook Naoya as Kazuya. Naoya, who has yet to remember clearly what happened at the time, started to question his own identity. Kazuya once again separated Naoya from his friends. Once separated, Naoya started to remember the past he memory repressed when Kazuya died. Once he remembered everything, Naoya finally realised that he is not the real Kazuya, something which 'Kazuya' confirmed. He is not the real Kazuya, but is in fact the manifestation of Naoya's guilt and self-hatred for being alive instead of Kazuya. He then stabbed Naoya, seemingly killing him. Aki then appeared and taunted 'Kazuya', revealing that she never has any intention to make him a real person and only gave him false hope so she can see him falling into despair. 'Kazuya' then started to disappear, but was stopped when Naoya was revealed to be alive. Naoya finally decides to accept Kazuya as part of himself. With this acceptance, Kazuya returned inside Naoya, ceasing from existence. 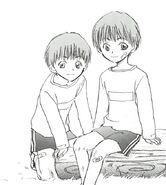