Kazushi has short, spiky black hair and darkish grayish brown eyes. He is never seen wearing the school uniform of Gekkoukan High School, but instead a gray athletic uniform. If the player chooses to join the Swim team, he wears a navy speedo with a badge on the left side of Gekkoukan High; Track team, he wears a gray tanktop and shorts with red lines; and if the player chooses the Kendo Team he wears a standard outfit with a dark navy bōgu, and hakama.

He first seems to be tough, serious, and focused, but is a friendly student who always works hard on the coming competition while keeping his secret about his knee injury to his other team members. He is also referred to as a 'pure soul' by Junpei when he reveals that he doesn't know what a maid is.

Kazushi is a member of any of the three Sports Team that the protagonist joins. He is a determined sports freak who is aiming for the team championship trophy, which he says is done for the sake of his nephew. After establishing his trust with the protagonist, Kazushi reveals that he is suffering from some sort of knee problem, but asks the protagonist to keep it a secret, determined not to let the problem interfere with his training.

Ignoring the pain, Kazushi continues training, but find that he could not keep up with other teammates' progress. Angered at this predicament, Kazushi finally pushed his knee to the limit, to the point that if he continues with his training, he might not be able to walk at all. Finally, with the protagonist's urging he decided to tell the team about his injuries, pull out of the championship and go to the hospital for surgery.

After spending some time at the hospital, Kazushi's knee injuries have healed. He admitted that all he did was nothing more but for his own pride. He promised to do better for the championships next year, and resolved to listen to other people's advice.

In the female protagonist's route, the Chariot Arcana Social Link —while still sports related — is replaced by Rio Iwasaki. Kazushi still makes many appearances throughout the game, usually alongside Yuko Nishiwaki (such as during the sports retreat to Yasoinaba in early August) or Kenji Tomochika (during the school trip to Kyoto in November). Many references are still made to the male protagonist's Social Link events, namely his injured knee.

Kazushi makes a few appearances; he is first seen alongside Kenji comforting Junpei after he failed the mid-exam, and is then later seen doing kendo training with Makoto and the other members.

He and Kenji appear briefly in the hallway during September.

Kazushi and Kenji are seen again where they arrive a cafe where Makoto and Ryoji work part-time there in November.

Kazushi complains about the kendo club's lack of motivation and how Yuko leaves practice early. He is briefly seen with Kenji, witnessing Nyx's arrival. 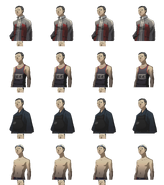 Kazushi with the group

Kazushi and Yuko in the manga adaptation

Kazushi in Persona 3 The Movie