Yama
Kazumi Kiba is the protagonist of Persona: Tsumi to Batsu.

Kazumi Kiba has brown hair with a parting that goes off to the left side, redish-brown eyes, and a varying complexion. He's shown to be wearing a Seven Sisters High School uniform, consisting of a black jacket and black pants adorned with white stripes along with a black belt that has a silver buckle. In addition, he wears a white shirt and a red necktie, which is similar to Tatsuya Suou's own white shirt and sky blue necktie combination.

Kazumi Kiba, the protagonist, has a dream where he encounters Philemon. The next day, reminded of his dream, he suggests a masquerade ball for his class' contribution to the Seven Sisters High School school festival. Because of this, he and his long-time friend Rihito Shimizu are tasked with finding masks for the ball and, in searching for them, encounter Igor acting as the proprietor of a mask shop. However, as they return from the shop, Rihito suddenly vanishes.

After a few days with no word, Kazumi is led to a purportedly haunted abandoned factory where Rihito is said to have been seen. There he comes into contact with not only Rihito, but demons under his control as well. Rihito attacks him, claiming to have always hated him. Kazumi's Persona Yama appears at this time to protect him before he is knocked unconscious.

When he awakens he encounters the Persona-bearing family that supposedly haunts the abandoned factory and is introduced to the Velvet Room. From this point on, he is drawn into a conflict with Rihito and his companions from Nymphéa as more is revealed about his history with Rihito and the incident ten years prior to this surrounding their mutual friend, Mana. 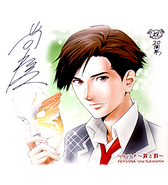 Kazumi's PERSONA 20th Anniversary Artwork
Add a photo to this gallery
Retrieved from "https://megamitensei.fandom.com/wiki/Kazumi_Kiba?oldid=389104"
Community content is available under CC-BY-SA unless otherwise noted.