Art Director
"Another thing that bothered me was the trend of the main character always being portrayed as someone special -- a legendary warrior, for example. It was the equivalent of saying you can't succeed unless you're from a wealthy family, and I just couldn't stand that. I wasn't born with special genes, and I'm sure most other players weren't either. No matter who you are, if you're given a chance and have the guts to try your best, you can become a hero... That became the concept of Megami Tensei."
—Kaneko Kazuma

Kazuma Kaneko (金子一馬, Kaneko Kazuma) is a Japanese art director, illustrator and employee at Atlus. While working for Atlus, he has also done freelance work for Capcom and Konami among many others. Kaneko designed Dante and Vergil's Devil Trigger forms in Devil May Cry 3 and Inhert and Lloyd from Zone of the Enders 2. He also illustrates covers for several novels such as The Case of the Dragon Slayer. He is, however, best known for his work in the Megami Tensei series.

Kazuma Kaneko was born on September 20th, 1964, in a sushi restaurant in Shimokitazawa, Tokyo. He was also an only child. His residence was above the sushi shop his parents owned, where he did work for a short time. As a kid, Kaneko was fascinated with mysterious phenomena and conspiracy theories such as the Loch Ness monster and UFOs; this fixation evolved into an interest in mythology and religion with Kaneko reading many religious texts for leisure, citing the Book of Revelation among his favorites.

Kaneko said his skill of drawing three-dimensionally came naturally to him in his youth. Kaneko entered tons of contests as a child for his art and said he won quite a bit of prizes for his work. Kaneko said he won the competitions because he would consider the theme and was a calculated choice of style and approach. He said he figured it was because he had a mind for problem solving and guessing saying he at one point wanted to be a rock star or a detective.

He said he'd occasionally have painting teachers come to his home to suggest he take their classes because of his talent. He said this attention came as a surprise to him saying "Oh, I'm talented? It's not a big deal."

Kaneko improved his skill in art through practicing imitating things he liked. He said he would recall compositions he liked after looking at them and be able to competently reproduce them.

He said his art at the time was reminiscent of manga from that era, his favorite manga being Devilman. He also loved the work of Fujio Akatsuka and Shotaro Ishinomori. He even had a piece he did of Kamen Rider on Cyclone put on display by his teachers when he was in the third grade. He said he'd buy one or two books at a time and ended up owning over 600 books at his home. Kamen Rider's manga would be something he'd get excited to talk about with his friends and he'd also buy western literature saying he read The Martian Chronicles and 2001: A Space Odyssey and didn't like them.

By his teen years, Kaneko stopped watching anime and reading manga. He said this was an attempt to be popular with the girls. He also found himself getting into western music and culture and he would dress and act like Clint Eastwood in Dirty Harry and eat hamburgers. Kaneko became infatuated with disco around that time as well.

In early adulthood, Kaneko had a somewhat active nightlife. Stating he idolized John Travolta and wanted to be a dancer. He says he would dress like he was in Saturday Night Fever and go dancing in Ueno. He said he'd get harassed a lot and was told he'd get put on the police's list as a yakuza member, and no venue would let him inside. He would also get into fights. Though, he wasn't a fighter and would often run away.[1]

By the age of 20, Kaneko was an animator. He originally worked in animation with highlights of his work including Disney's Gummi Bears and Saint Seiya. Kaneko said this job proved to be valuable in improving the quality of his line work and the speed of producing art. The main detracting factor of animation was the low pay, and alternatively the gaming industry was starting to boom again in Japan.

After playing Megami Tensei, he decided to join Atlus and applied to work there in 1988.

Kaneko first met Cozy Okada, who was a programmer and the founder of Atlus. He said his first memory of Cozy was seeing him in the back eating lunch while Kaneko was being interviewed. Kaneko said this all happened by chance. This is impressive because Kaneko never went to art school and was completely self taught. This played into a self-professed inferiority complex he says he held onto until the mid-nineties where he felt he lacked identity and things like color selection and use were a struggle for him. Kaneko praised Atlus for being unusual in its representation of mythology, where most fantasy games represented Greek myth. Megami Tensei featured Indian and Balinese gods and Kaneko said he was amazed that the games also had sex. His first project being King of Kings wherein his Lucifer design seems very reminiscent of his work later in Megami Tensei.

Kaneko describes his early work as very forced and clumsy. He compared himself to that of a manga artist who won the newcomer prize and then gets better after doing all the work.[1]

Kaneko said his designs would often include popular sneakers, T-shirts and clothes he loved but couldn't afford. This is something very apparent in his work, especially the later work such as in Persona, where popular brands can be seen recreated in his art. His art supply from this era were Copic markers. He also listens to dance music while he works, and continued to do this for his whole career.[1]

Kaneko described that for his demons, he loved using natural phenomena as inspiration and reinterpreting the demons his own way that fits the game they will appear in. One thing Kaneko reveled in was giving shape to lesser known mythologies.[2]

When designing a character, he typically works closely with the writer of a given game to understand better what the character is like. To Kaneko, it's important to design a person from a living world rather than a character from a video game, understanding who the person is and not wasting time on design elements that don't give out that info. He also said whatever emotion he's drawing on his character's face ends up being on his face too as a habit.

He says his work often reflects his likes and interests from childhood and that even in his lifestyle he reflects those influences, especially Lupin the Third[1], Black Jack and Bruce Lee. Because no one really ever praised his work as a kid and growing up Kaneko attributes drawing well to drawing when no one can see and thus he was very secretive when drawing. When Shigenori Soejima was new to the company, he would often try to watch Kaneko draw, but Kaneko would shoo him away. Kaneko also says this is why he doesn't draw publicly or for fun and why he has trouble improvising.

He sighted shows like Key Hunter, Eyeful Daisakusen and Playgirl, which are all very reminiscent of Devil Summoner, a series he would consider his favorite. He generally liked how the shows he was most fond of would end in an apocalyptic way. He described how as a child he read manga like Devilman and then later would read religious literature like the Book of Revelations and see parallels between the two and appreciate how it was integrated into the manga. This left him motivated saying that in ten or twenty years he'd love for players to realize and say "Oh that's what they were trying to say" and that would satisfy him.

By 1996, Kaneko had transitioned to working on Mac and using a tablet as part of his design process. He would take a piece he'd done on paper, scan it, and then add lighting effects and filters to finish the images. Kaneko would even do stuff like that to images of himself in Photoshop. His art process at that time was as follows:

First he draws on A4 sized paper with pencil. He then takes several A4 which is roughly the size of standard printer paper in the west, and tape them together to complete a line drawing. He said the height of the image is generally about 3.2 feet tall or 1 meter. Once scanned, Kaneko continues to work in sections. He would add color and paint in painter and then finish the work in Photoshop. He used to struggle with the concept of "digital painting" but came to terms with the idea by saying "a painting is a painting" and that this was merely another way to finish a piece.

In 1999, Kaneko began using art assistants to work as colorists, or make art assets so Kaneko could focus on character and game design, shifting into the position of art director. By that time, Kaneko relied on a crew of an additional three to four people in order to complete work, he also gave some of the workload to other staff members to give them the spotlight.

These are quotes from Kaneko in regards to a particular subject:

People ask me this question a lot, but having drawn many gods and demons, every myth is so fascinating and every demon is so dear to me that I just can't pick one demon as my favorite ... I'm sorry. - Escapist Magazine Inteview[3]

Nintendo would complain about my designs a lot. "Why is this monster naked?" (laughs) Then I'd explain to them that it would be weird for this particular monster to not be naked, and they'd reply back, "Ok, we understand. Please remove the nipple then." I said, what is this now, a Go Nagai manga? (laughs) - Game Hihyou magazine Interview[1]

Go Nagai is a mangaka notoriously famous for having his works criticized by parents and teachers that deem his works are obscene and explicit that much of it was censored by publishers.

Below is a list of works within the series associated with Kazuma Kaneko. 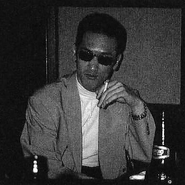 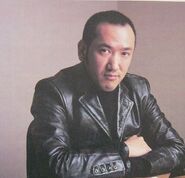 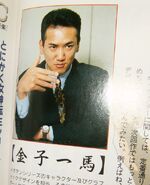 Kazuma Kaneko with Yoji Shinkawa from the Z.O.E. 2 art book.

Illustration of Cozy Okada, Q Hayashida and Kazuma Kaneko from Maken X Another