None
Kaya Daidouji is a character from Devil Summoner: Raidou Kuzunoha vs. The Soulless Army.

When she was possessed by Raidou Kuzunoha the XL, she gains her short hair.

Kaya Daidouji grew up in one of the biggest houses in the Capital, she doesn’t put on airs and gets along with her schoolmates at Ouran High as well as the family’s servant staff. Her sunny demeanor hides a dark secret.

Kaya Daidouji is the only daughter of the venerable and wealthy Daidouji Family. Kaya may hold the key to the mysteries plaguing The Capital.

Kaya spent much of her time locked in a secret basement beneath the Daidouji Residence as she approached her sixteen birthday, but with the help of her uncle, Kiyoshi, she escaped only to meet with Munakata's forces. Desperate, she contacted the Narumi Detective Agency and requested to meet them in private. Narumi and Raidou went to meet with Kaya, only to witness her taken by mysterious masked soldiers dressed in red.

Much later Raidou was able to rescue Kaya, who took up temporary work at the Narumi Detective Agency afraid to return home. But all was not well, and after using Raidou to help her acquire an ancient artifact needed for the Super Soldier Project, revealed that she was already possessed, and escaped into the Dark Realm.

Finally, after Raidou destroyed the Soulless God Oumagatsu, he is able to pursue Kaya into the Akarana Corridor, where he discovers that the presence within Kaya is a Raidou Kuzunoha of the future. After a long battle, and even after the entity possesses the Soulless God Yasomagatsu, Raidou is able to defeat it. Expelling the entity from both the ship and Kaya, Raidou cast it into the abyss of time, and returned Kaya safely to her family. 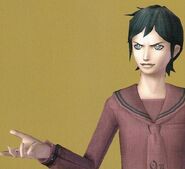