Karma Soldier officer
"So mother sent you here... I thought she might have. Still, I don't want to go back! Never! Why...? ...Because I'm scared. Yeah, that's right. I'm scared of my mother. Well, Mother's very kind, but... It's just that... She's just way too out there! Like she doesn't belong in this Universe! I used to be six kids! But Mother hugged us all together, and we got merged into one person. Who has that kind of power!? That's just not right! Look... Once, she accidentally cut off somebody's head, and then she just replaced it with an elephant's head. My entire family is messed up! "
—Kartikeya, Shin Megami Tensei IV.

Kartikeya is a recurring demon in the series.

Kartikeya, also known Subramaniam, Sanmukha, Shadanana, Skanda and Guha, is the second son of Shiva and Parvati and younger brother of Ganesha.

In the southern states of India, Kartikeya is a popular deity and is better known as Murugan. He is an embodiment of perfection, a brave leader of god's forces, and a war god, who was created to destroy the demons, representing the negative tendencies in human beings. He rides upon a peacock called Paravani, with a bow and arrow drawn. He also possess the spear, "Vel of Murugan," that Kartikeya used to defeat the inner Asuras and releases the soul from transmigration. Kartikeya's other name, Shadanana, which means "one with six heads" corresponds to the five senses and the mind. The six heads also stand for his virtues and enables him to see in all the directions, an important attribute that ensures that he counters all kinds of blows that can hit him.

The war imagery and the six heads of Kartikeya indicates that if humans wish to lead themselves efficiently through the battle of life, they must always be alert lest they are shown the wrong path by crafty people with the six demonic vices: kaama (sex), krodha (anger), lobha (greed), moha (passion), mada (ego) and matsarya (jealousy). Kartikeya carries in one hand a spear and his other hand is always blessing devotees. His vehicle is a peacock, a pious bird that grips a serpent with its feet, which symbolizes the ego and desires of people. The peacock represents the destroyer of harmful habits and the conqueror of sensual desires. The symbolism of Kartikeya thus points to the ways and means of reaching perfection in life.

Kartikeya acts as one of the two chaos field bosses tied to the Invoke system and will appear in Ueno once every hour during weeks when the Chaos alignment dominates the system. After obtaining the Peacock Feather he drops, he can be fused by a special double-fusion of Parvati and Zouchouten.

Kartikeya appears in the New Game Plus Challenge Quest, Escape from Philanthropy. He has left Parvati's side and is hanging out at Shinjuku - East Entrance Main Street in the world Infernal Tokyo. He has lost his mind and must be defeated to calm him down. After taking a certain amount of damage he flees to Shinjuku National Park. He goes back to East Entrance Main Street after fleeing the second time. He is defeated in the third battle and comes to his senses, surprised by how violent Flynn is.

He states he has no intention of going back to his mother Parvati due to her sheer alienness. He also reveals he is scared of her, telling of how he used to be six kids until his mother hugged them all and merged them into one. Kartikeya also mentions a time where she accidentally cut off a man's head and replaced it with an elephant's. He considers his entire family to be messed up and it's for that reason that he got scared and ran from them. He decides to go home one last time to talk to Parvati about everything before officially going off on his own, thanking Flynn before leaving, while also realizing his current form isn't bad since he became able to reach speeds he never could before.

Kartikeya can teach Nanashi the Heaven's Bow, Debilitate and Charge skills through his Demon Whisper. He benefits from learning Gun skills.

"A Hindu god of war, also known as Skanda and Murugan. He rides upon a peacock called Paravani, with a bow and arrow drawn. He commands the army of the gods, and defeated the forces of Asura."
—Persona 3 compendium

Kartikeya is an exclusive Persona added in the updated re-release Persona 3 FES. He is available to be summoned once the protagonist completes one of Elizabeth's dating requests and reaches Lv. 70 or above.

Fusing Kartikeya with a Nihil Weapon will produce Vel Vel Muruga, the ultimate naginata weapon for the female protagonist. It is supposed to represent the spear "Vel of Murugan" that Kartikeya used to defeat the inner Asuras and releases the soul from transmigration. The "Vel vel" is also used as a chant for Kartikeya's devotees, which is believed to bestow strength and grace from him.

Kartikeya returns as a Persona of the Star Arcana in Persona 4. He is available to be summoned once the protagonist reaches Lv.67 or above.

A fragment of Kartikeya - Skanda's Wing, obtained by using it as a fusion sacrifice - is one of the materials required to make Yukiko's ultimate weapon.

Kartikeya appears as a boss in Digital Devil Saga: Avatar Tuner 2. During the Embryon's search of the Airport, a Karma Soldier officer bars their path. He states that he is impressed that Asura AI were able to break free of Jenna Angel's control and transforms into Kartikeya to engage the party.

The fight with Kartikeya itself isn't that taxing except for one skill, Vivid Gust, which gives Kartikeya a huge boost in evasion. Every miss costs the party two turns and the skill remains active until Kartikeya is hit. The peacock's feathers will be spread as a visual reminder while he is in this state.

The most effective way to counter Vivid Gust is to repel his own attacks which he cannot dodge regardless of his evasion boost. Kartikeya's first action in each turn follows the order of force skill, electric skill, physical skill and Vivid Gust (always immediately followed by Taunt) and repeats. If Vivid Gust is already in effect, the pattern of Vivid Gust simply starts with Taunt. When Kartikeya's HP becomes more critical, he will use his unique attack, Myriad Spears, which deals heavy physical damage to all enemies. When his damage figure appears red and his next pattern is going to begin with physical skill, the player can safely spend an Attack Mirror so he will be killed by his own attack, especially after all player characters' defense are lowered by his Taunt spell.

"A Hindu god of war, also known as Skanda and Murugan.
He rides upon a peacock called Paravani, with bow and arrow drawn. He commands the army of the gods, and defeated the forces of Asura."
—Devil Survivor 2 compendium 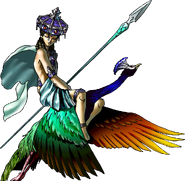 Kartikeya as he appears in Card Summoner

Kartikeya as he appears in Devil Survivor 2

Kartikeya as he appears in Shin Megami Tensei IMAGINE