Gun
"You’ve arrived at a period of time in which you don’t belong. You have disrupted the proper flow of time. We call those like you, who cause disruptions in the time stream, 'Intruders'."
—Chapter 18, Back Again

Karen has long blonde hair, green eyes and fair skin. Her outfit consists of a pink jacket and skirt, black leggings and a white shirt underneath her jacket. She often carries a gun and also has a COMP on her person.

A mysterious girl from the future who speaks to Naoki Takeuchi in his dreams, she appears to know about what is happening in Tokyo. Karen is 25 years old. She can use daggers, spears and guns.

Karen Rose hails from the future of 2654 in the city of Megalopolis, which was built over the former city of Tokyo that was destroyed by demonic forces in 1996. She first appears to recommend that Naoki uses the DIO program, which will allow him to summon demons and communicate with them.

If the protagonist selects the Neutral route, she will be replaced by Masakiyo Ogiwara instead. Otherwise, she will be the fifth character on either the Law or Chaos routes. She is an agent of the Time Paradoxing Warning Organization (TWO), and her mission is to travel into the past to prevent any changes to the timeline that would undo the creation of Megalopolis. If she were to fail, this could erase her entire existence. Yet if she prevents any paradoxes, this would result in Tokyo, as well as the entire world, suffering heavy losses. Her internal conflict is compounded even further as she and Naoki grow closer.

In the Light-Law Route, Karen's existence is erased when HELIOS is fired, destroying Megapolis, as Karen was born after 2052. When a Seraph does revive her using a forbidden art, it creates a wormhole in space time allowing the heroes to travel to a specific instance in history before HELIOS is fired allowing the heroes to progress to Eden. In the ending of that route, she is sent into the past by her superiors to act as an assistant for Dr. Takeuchi. 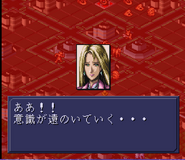 Karen with her superior in the Light-Law ending

Karen as Naoki's parents' assistant in the Light-Law ending