Kamui is a Persona in the series.

Kamui are powerful divine spirits in the Ainu regions, somewhat similar to the kami in Japanese mythology. In particular, this incarnation of Kamui is based on the figure known as Kim-un Kamui, the Ainu deity of mountains and bears. A ritual is performed by the Ainu wherein a bear cub is captured and raised in civilization for a year. Once a year has passed, the bear cub is shot by an arrow (referenced by a Russian Strela rocket in Kamui's design) and killed in order to return to the heavens and tell of humanity's gratitude.

Kamui is Teddie's second tier Persona and can be obtained once the Star Arcana Social Link has been completed. Kamui will receive a +1 bonus to all of its stats and it nullifies Ice skills, resists Wind and Darkness skills but is weak to Electricity. Speaking with Teddie after January 10 will transform Kamui into Kamui-Moshiri.

Kamui in Persona 4 The Animation

Kamui appears in Persona 4 The Animation 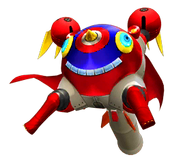 Kamui in Persona Q: Shadow of the Labyrinth
Community content is available under CC-BY-SA unless otherwise noted.
Advertisement