Kamu Susano-o is a Persona in Persona 5.

In Japanese mythology, Susanoo is the god of storms and the brother of Amaterasu, the goddess of the sun, and of Tsukuyomi, the god of the moon. All three were spawned from Izanagi when he washed his face clean of the pollutants of Yomi, the underworld.

Kamu Susanoo no Mikoto, on the other hand, only appears in Izumo no Kuni Fudoki with the "Kamu" part simply meaning "god" in archaic Japanese.

"A Japanese god found in the Izumo Fudoki. He was one of the three gods born from Izanagi. He was a violent ruffian, but also has a sensitive side, showing love for his mother and reading poems."
—Persona 5 compendium

Kamu Susano-o is the ultimate Persona of Yusuke Kitagawa. This version of Susano-o appears to look like a Japanese warrior with draws on his blue body and has Japanese artwork as a cape. 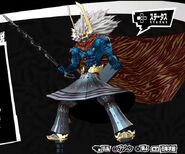