Kamoshidaman is a cross between Suguru Kamoshida and the fictional hero Superman. He appears as a muscular, slightly taller Kamoshida wearing a superman outfit with a "K" on his chest. If one pays attention, his white boots resemble rabbit's feet. He carries a pair of carrots that he eats to transform into Super Kamoshidaman.

When he transforms into Super Kamoshidaman, he becomes a monstrous creature with Kamoshida's face and the body of a rabbit, having white skin, long ears, red eyes, red claws, and buck teeth. His upper and lower body grow larger, his legs become longer, and his waist narrows. He uses a pair of carrots as weapons, which are also missile launchers.

Kamoshidaman is a selfish and vain bully who considers his dictatorship as "justice" and anyone who opposes him as "evil." The people in Kamo City worship him to the level of idolatry only because Kamoshidaman forced them; those who do not worship him are killed. He does not care about others and only seeks to keep his "justice" and power if possible. When he transforms into the monstrous Super Kamoshidaman, he loses his mind and goes berserk, relentlessly attacking the party while calling it "justice." This mirrors the original Suguru Kamoshida, who viewed himself as the untouchable king of Shujin Academy.

However, as Kamoshidaman is a separate entity from Kamoshida, he does have significant differences. Most notably, he lacks Kamoshida's predatory behavior—he kidnaps Makoto and Haru only because he saw them as evil. He has no idea what Shujin Academy is, nor does he know who Ann, Ryuji, or the P5 hero are. Kamoshidaman also genuinely tries to help the film's citizens after the movie's ending is changed.

Kamoshidaman is a superhero that appears in the movie Kamoshidaman as its titular protagonist. He is a superhero of absolute justice, regardless of how selfish or amoral his own actions are. He has turned the city Kamo City into his own utopia, where the citizens worship him and those who oppose him are punished.

The Phantom Thieves accidentally land in his reality while traversing Mementos, but manage to escape. However, while fleeing an F.O.E, Makoto and Haru are separated. The remaining party members enter the cinema where Hikari and Nagi are watching Kamoshidaman. They tell the Thieves that Makoto and Haru are still inside the movie.

A trailer for the film plays, wherein a giant burglar terrorizes the city. Kamoshida, transforming into Kamoshidaman, effortlessly dispatches the burglar. However, the burglar's body collides with a father buying his young daughter a stuffed bear, killing him instantly. When the girl confronts an unrepentant Kamoshidaman, pointing out her deceased father, she is labeled a "wicked miscreant voicing discontent" by the narration. It is considered unforgivable to defy Kamoshidaman, and as such she is an evil that opposes righteousness.

When the trailer ends, Ryuji and Ann express their disgust for Kamoshida to Nagi, who has no idea who he is. The party believes both the cinema and Doe, the theater's mysterious projectionist, are somehow related to Kamoshida. Nagi explains that the Kamoshidaman in the moves is not the same as their PE Teacher, only sharing his likeness. In reality, the original movie's superhero changed to resemble Kamoshida only after the Phantom Thieves arrived.

Within the Labyrinth, a live news broadcast plays, showing Haru and Makoto captured by Kamoshidaman and confined at Kamoshida Square. He announces his plans to execute the two and displays wanted posters for the remaining members of the Phantom Thieves. The people in the city unanimously idolize and praise him.

The party confronts Kamoshidaman the next time they enter the movie, after the P3P heroine has joined the group. After noticing the statue wobbling in the breeze, the Thieves attack, but Kamoshidaman resists all damage. Makoto, who overheard a police officer saying Kamoshidaman is invincible only so long as "that" is around, deduces that the object in question is the statue. However, the party can't move freely nor can they target the statue as is, so they retreat and regroup.

The Phantom Thieves formulate a plan to remove the statue rather than destroy it. They go about this by shutting off the city's power and tying the statue to balloons, replacing it with a cardboard cutout. Without the statue, Kamoshidaman is severely weakened, to the point where the P3P heroine can trample him just by landing on top of him. In battle, the loss of the statue makes him pathetic and prone to wasting a turn doing nothing. After he is defeated, he is weak in the eyes of Kamo City's citizens, and the people begin to doubt his brand of justice.

However, Kamoshidaman then uses a pair of carrots to transform himself into Super Kamoshidaman, a monstrous rabbit-like creature that possesses incredible resistances until the pair of carrots he holds as weapons are destroyed. The party manages to defeat him and Kamoshidaman vanishes. The movie's credits roll, Hikari and Nagi watching along. After he is defeated, Doe creates the key to enter the second movie.

It is later revealed that Kamoshidaman is based on one of Hikari's childhood traumas that resulted in her extreme depression and low-self esteem. She used to believe that teachers were superheroes due to a movie she watched, but during primary school, an event broke that illusion. The class rabbit fell ill one day and died due to food poisoning, and she and two other students were responsible for feeding it at different times. The other two students apologized, but Hikari refused to, as it wasn't yet her turn and therefore not her responsibility. In reality, the vegetables that her teacher gave to the students to feed the rabbit were poisonous, so the teacher was the true culprit. Her teacher would not accept any explanation other than an apology. Since Hikari wouldn't, her teacher called her a bad kid and the class unanimously placed the blame on Hikari because they did not want to oppose their teacher. They successfully forced Hikari to apologize, which she begrudgingly did.

In the movie, Hikari views her teacher as Kamoshidaman and the students as the passersby that idolize him, effectively making them cognitive existences of their real life counterparts. The idea that teachers are superheroes forms Kamoshidaman's appearance, and the alleged poisoning of the class rabbit results in Super Kamoshidaman turning into a monstrous rabbit, representing Hikari's resentment for the misplaced blame. Kamoshida's original identity was a random actor; the superhero in the movie only looked like Kamoshida because of the Phantom Thieves' perception of rotten authority figures.

In the Depths of the Theater District, one of the Negative Film projectors creates a monochrome version of Kamoshidaman to protect itself. This version of Kamoshidaman boasts its absolute power, and declares that following its rule is justice; thus, Kamoshidaman gets to decide what is right. In battle, it does not transform into Super Kamoshidaman and retains some of the bad habits of the original's first form, like wasting its turn on an ineffectual Absolute Power. It's also weak to Fire and can be knocked down for an All-Out Attack, but will also use Fire Screen after recovering.

Right before confronting the mastermind, the edited version of Hikari's film displays a Kamoshidaman that vows not to abuse his power. During the credits sequence, he is seen carrying an old woman on his back.

This is a highly difficult first fight. Before the party fights him, they should prepare lots of HP recovery and revival items, as the majority of his damaging moves are near-fatal at this point of the game and can kill multiple party members. The only revival items at this point are Gutsy Fries, which are highly ineffective especially when Super Kamoshidaman kills multiple party members. It is recommended that the party has access to Media, either by leveling Morgana up to 13 or by leveling a Silky up to 12. Recarm is also available on a level 9 Sarasvati.

For the first phase of the fight, do not use any resources and just rush him down with regular attacks, since his attacks never do more than 1 damage and he can often squander his turns. Furthermore, any used HP and SP will not be carried into phase two of the fight.

The Right Carrot is weak to Fire and Bless skills, while the Left Carrot is weak to Electricity and Curse skills. The Right Carrot is exceptionally fast, capable of acting before most of the party's available members and delivering near-lethal damage, and should be prioritized. The Left Carrot is slower and less powerful but has an attack with a splash effect, which can remove Boost from multiple party members at once. Super Kamoshidaman starts the fight with an Affinity Barrier up and will resist all damage, but will not act for most of the fight barring the occasional Bunny Slumber that puts a party member to sleep.

Once both carrots are destroyed, Super Kamoshidaman's Affinity Barrier automatically breaks and he becomes weak to Fire. While it is a perfect opportunity to exploit this newfound weakness for free damage by All-Out Attacks, he will respond to a successful All-Out Attack with Fire Screen which neutralizes this Fire weakness for three turns. He will also begin acting more proactively, attacking twice per turn, not including his Fire Screen skill. If any party member is put to sleep with Bunny Slumber, Super Kamoshidaman will target that party member next turn with Kamoshida Kick, which will be lethal if the party member is not woken quickly.

Because of the lack of equipment options, good skills or recovery items, it is not unusual to run out of SP by the middle of the fight. Since Super Kamoshidaman will always remove his weakness when hit by an All-Out Attack, focus on using physical attacks and fish for critical hits to knock him down. The P5 hero's Rebel Vanguard and Morgana's Lucky Punch are ideal for inducing such conditions. Super Kamoshidaman can be poisoned, although the carrots are immune to all ailments. Poisoning him gives free additional damage and can increase the chances of winning significantly - this is crucial to the alternative strategy above as it helps in breaking the Affinity Barrier without requiring much resources. 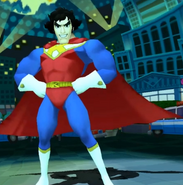 Kamoshidaman as he appears in-game 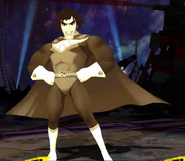 Kamoshidaman in the end credits 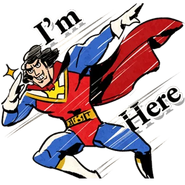