Kama is the Hindu god of love. He rides on a parrot, or sometimes an elephant, and wields a bow and arrows made of sensual elements. When the demon Tarakasur had been constantly defeating the gods and ravaging heaven, they sought a way of destroying him and learned that he could only be destroyed by a son of Shiva, who was a complete ascetic yogi. They eventually sent Parvati to woo Shiva, and Kama, who was sent in advance, created a spring around Shiva and broke his dhyana with his flower-arrow, which woke Shiva from his yogic state, causing him to burn Kama to ashes with his gaze. After he had been burned, he became a disembodied spirit of love who was disseminated across the universe. He is now widely known as the vaporized free spirit of love roaming the universe, such a spirit was by the Vaishnavas in the form Vasudeva, the father of Krishna, who himself is an avatar of Vishnu.

"The Hindu god of sexual desire. He looks like a young, handsome man on an owl.
He uses honeybees as his string and shoots arrows tipped with flowers. By the gods' request, he shot Shiva, but Shiva was angered and burned him with his third eye."
—Shin Megami Tensei: Strange Journey compendium

Kama can be obtained through a special fusion of Diana and Jarilo. He can teach Nanashi the Heaven's Bow, Madness Needle, Dekunda and Dekaja skills through his Demon Whisper. He benefits from learning Gun, support and ailment skills.

The Kama Palace is named after him.

"The Hindu god of sexual desire. He looks like a young, handsome man on a parrot.
He uses honeybees as his string and shoots arrows tipped with flows. By the gods' request, he shot Shiva, but Shiva was angered and burned him with his third eye."
—Devil Survivor 2 compendium

To shoot down Alioth's core, the protagonist's party has to re-enact the myth between Shiva and Kama, where Kama invoked Shiva's rage by shooting him with an arrow. In order to coax Kama out, one of the female party members has to invoke sex appeal. Airi is the only one who willingly tries this.

After Kama is successfully summoned, the party tells him of the plan to shoot Shiva. Clearly remembering his punishment from the myth, Kama outright refuses to this, prompting Fumi to suggest physically restraining him. Kama then splits into 5 near-identical demon (Pyro Jack) teams to confuse the player as he attempts to escape. Upon discovering and defeating his disguised self, Kama reverts to his original form, and the player has to defeat him once again.

Kama reluctantly agrees to the plan. Once Shiva is summoned, while the plan is in action, Kama reluctantly shoots Shiva under belief that Yamato would protect him from Shiva's wrath. However, he is simply lifted up towards Alioth's core, allowing for Shiva to incinerate him and send Alioth crashing down. Kama is then unlocked for fusion after his second demise at the hands of Shiva. 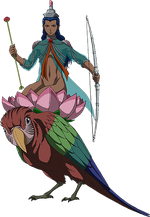 Kama also plays a role in defeating Alioth in The Animation. Unlike his game counterpart, he does not seem to speak, and is summoned in Sapporo alongside Shiva. This time, rather than being lifted magically by Yamato, he is instead immediately bound in chains by multiple Legions summoned by JPs. After being positioned between Alioth and Shiva's sight range, Shiva throws Pasupata towards Kama (who is thus destroyed by the flames surrounding the spear), and in the process, destroys the whole Alioth core.

"The Hindu god of sexual desire. He is depicted as a handsome young man riding a parrot. It is said that those who are struck by the flowered arrows of Kama will fall in love. When Kama shot Shiva during his meditations, Shiva in rage burned him with his third eye."
—Shin Megami Tensei: Liberation Dx2 Demonic Compendium

Kama first disguises himself as 5 near-identical demon teams. The player has to find the real one before he escapes. After the team holding the real Kama is defeated, Kama himself appears and the player has to defeat him too.