Kali is a demon in the series.

Kali is a Hindu goddess associated with death, time and destruction. The name Kali means "black," but has by folk etymology come to mean "force of time (kala)." The name "Kali" means "black one" and is derived from the word "kala" (black), but has also come to mean "goddess of time". Despite her negative connotations, she is today considered the goddess of time and change. Although sometimes presented as dark and violent, her earliest incarnation as a figure of annihilation still has some influence. More complex Tantric beliefs sometimes extend her role so far as to be the "ultimate reality" or Brahman. She is also revered as Bhavatarini (literally "redeemer of the universe"). Comparatively recent devotional movements largely conceive Kali as a benevolent mother goddess.

Kali is represented as the consort of god Shiva, on whose body she is often seen standing. She is associated with many other Hindu goddesses like Durga, Bhadrakali, Sati, Rudrani, Parvati and Chamunda. She is the foremost among the Dasa-Mahavidyas, ten fierce Tantric goddesses. Her sacred place is Calcutta (Kali-Kut), where she still retains many followers who worship her as a mother goddess.

Kali is a fierce aspect of Durga who is an aspect of Parvati. She and Durga are also aspects of the Divine Mother, Shakti.

If the protagonist possesses the Heidrun, from trading a Member's Card, and the Fallen Angel Wing, after doing the Jack Frost Jr. trick, the next time the Cathedral of Shadows is entered, Jack Frost Sr. will offer the protagonist a Qing Long, Bai Long and Kali to add to his team, regardless of level.

"Origin: India. Shiva's consort and a fierce goddess of rage. She is a symbol of rage towards the Asura army. A black Kali is said to appear from the angry face of Durga, Shiva's consort. She massacres all things with her two left arms."
—Shin Megami Tensei A-Mode DDS Dictionary.

"A goddess of Indian mythology. She is one of the consorts of Shiva, the god of destruction.
The name "Kali" means "black one" and is derived from the word "kala" (black), but has also come to mean "goddess of time." Her sacred place is Calcutta, where she still retains many followers who worship her as a mother goddess. Kali is identified with Durga, an alternate aspect of Parvati transformed by anger at Asura into a fearsome form.
Kali loves blood, wine, slaughter, and battle. She is black from head to toe and has four arms, each of which is always carrying a blood-stained weapon or a severed head. However, her arms are said to have the power to grant blessings to those who believe in her."

Kali can only be acquired through fusion. She appears as an enemy within Nakano Stone Site gold's instance and Ichigaya's Kagurazaka Zhu Que Caverns gold instance. She also can be spawned as the field boss Merciless Queen Kali by killing mobs on Ueno field at night.

Kali (addressed with an additional "Ma" suffix in the Japanese version) is the last of the wardens in the Womb of Grief, found through an abnormal Enemy Search after the protagonist has defeated Anat. Defeating her completes the EX Mission, "Wardens of the Womb of Grief," which causes the protagonist to automatically earn the Gun Booster Ring, an accessory that boosts all his gun skills.

Her special fusion requires Ixtab, Dakini and Parvati, and is only accessible once the protagonist is level 86 or higher.

Dakini evolves into Kali at level 69.

Kali can be found in the Cosmic Egg, in the Fifth section. She can be also obtained by evolving Dakini at level 70, provided that Nanashi can control the result. She can teach Nanashi the Dark Sword and Mist Rush skills through her Demon Whisper. Kali benefits from learning Physical and Force skills.

Kali can be found in the Temple of Eternity's first and second floors.

"The Black One, a symbol of death and destruction. She is said to be another face of Parvati, Shiva's consort.
Wearing a necklace of human heads, she carries bloody weapons in her four arms. When Durga, another form of Parvati, was fighting the Asuras, she summoned Kali and defeated the Asura army in an instant."
—Devil Summoner: Soul Hackers 3DS compendium.

Kali is used in the battle with Kyouji Kuzunoha in the Extra Dungeon.

Kali appears as the ultimate Persona of the Empress Arcana. In order to create her, the protagonist must fuse the Spell Cards of Dakini and Gdon with the totem Kolkata Souvenir, which is dropped by Miyasudokoro. In Revelations: Persona, her name was mistranslated as Kari.

Kali is a Persona of the Empress Arcana. Fusing her requires the Skull Necklace Material Card (Necklace of Skulls in EP), obtained by Mystic Changing Durga in Innocent Sin, and bought at Mu Continent for 15,000 coins in Eternal Punishment.

"A goddess of death and destruction. She is said to be another face of Parvati. She is violent, wears a string of skulls, and carries bloody weapons, but she also blesses her followers."
—Persona 5 background.

Kali is the seventh Persona of the Empress Arcana and can be found as a red Shadow in the Qliphoth World, with the title "The Blackened Fury." She is one of two Personas to learn Vorpal Blade and the only Persona to learn Evade Ice and Drain Nuke. When itemized through Electric Chair execution in the Velvet Room, Kali will yield the Khamrai Tao accessory, which has the +Reduce Fire dmg (high) effect.

As a Shadow, Kali will primarily attack with Vorpal Blade and Brave Blade. Any critical hits will be followed up by Tentarafoo. While party members are afflicted with Confusion, Kali will take advantage of their addled state to score Technical damage with Psiodyne.

Kali is instead found as a red Shadow in Shido's Palace and the Sheriruth area of Mementos. A Kali alongside two Dakinis guard the palace's blue Will Seed.

"A four-armed goddess of destruction that wields a set of deadly swords."
—Demonary, DemiKids.

Kali helps lead the Karma Soldiers in their attempt to stop Sera from leaving the airport. She will be accompanied by Dakini upon confronting the party.

She primarily attacks with Physical attacks which also induce status effects. Kali repels all elemental attacks, and Dakini attempts to cover the only avenue of inflicting damage with Phys Repel. Taking Bufula to deal with Dakini, a strong single target Physical attack, and Diarama will easily allow them to be defeated. If the party has the Ice Boost and Death Resist skills to boost Ice damage and resist the effects of Blood Curse and Gate of Hell.

"The Black One, a symbol of death and destruction. She is said to be another face of Parvati, Shiva's consort.
Wearing a necklace of human heads, she carries bloody weapons in her four arms. When Durga, another form of Parvati, was fighting the Asuras, she summoned Kali and defeated the Asura army in an instant."
—Devil Survivor 2 compendium.

Savage (red) shadow; cannot be recruited until HP is below a quarter.

Kali is accompanied by a pair of Dakini.

Kali as she appears in Megami Ibunroku Persona

Artwork of Kali and Maki

Kali as she appears in Card Summoner

Kali as she appears in Devil Survivor 2 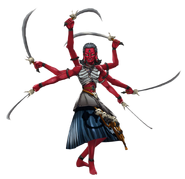