Kala-Nemi is a Persona in the series.

Kala-Nemi is the pre-Vedic spirit of the Zodiac, encircling the universe like a great serpent. Also referred to as the Rim of the Wheel of Time, Kala-Nemi's association to the zodiac is closely linked to the observation that all seasons are determined by the position of the zodiac in the skies. In the Ramayana Kala-Nemi is a Rakshasa, as well as Ravana's uncle.

In the Ramayana, Rama's brother Lakshmana is wounded, and requires a divine herb to be healed. King Ravana does not want Lord Hanuman to bring the divine herb for the wounded Lakshmana, so he orders the sorcerer Kala-Nemi to kill lord Hanuman and promises half of his kingdom to Kala-Nemi as a reward. Kala-Nemi travels to the mountain Hanuman is venturing to for the divine herbs, and under the guise of a sage, he attempts to deceive Hanuman. Hanuman sees through Kala-Nemi's deception, however, with the help of an apsara, and slays the sorcerer.

Kala-Nemi is the ultimate Persona of Ken Amada. Prior to him gaining this new power, Ken's initial persona was Nemesis, the goddess of divine retribution. After a dramatic event took place, his attitude and resolve changed: It was to never look back again, facing the future, and his fate, straight-on. Kala-Nemi, a Vedic deity of fate, would probably best reflect the personality of a boy who finally knows his way.

Kala-Nemi uses unique skills outside of its normal moveset when fought as an opponent in Colosseo Purgatorio, which are as follows: 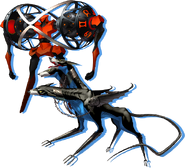 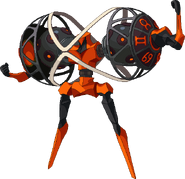 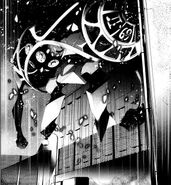 Kala-Nemi as he appears in Persona 3 The Movie

Kami-Nami with Artemisia and Isis in Persona 3 The Movie
Community content is available under CC-BY-SA unless otherwise noted.
Advertisement