Kaiwan is a recurring demon in the series.

Kaiwan (or Kiyyun) was a deity worshiped by some of the Israelites according to the Book of Amos. Amos 5:26 refers to "the star of your god." His name appears to be derived from the Babylonian name of the planet Saturn. Others suggest that the name comes from a Hebrew root word that refers to something on a pedestal or image stand, and might refer to an idol of another deity rather than a separate god.

Kaiwan is only mentioned once in the Tanakh, and in said passage he is associated with the similary unique Sakkuth.[1] This name was seemingly the title of the Mesopotamian god Ninurta, occasionally associated with Saturn. However, unlike other planets, Saturn had minimal importance in Mesopotamian religion. In the biblical text, the names of both of these figures were vocalized like shiqqūts ("abomination").[2][3] It's possible there was a deliberate changing of the pronunciation to suggest the idea of detestation of this figure in the eyes of God, much like in the case of Astarte's name being replaced by Ashtoreth.

In Acts of Apostles, there's a mention of a figure known as Remphan (ῥαιφάν), who seems to be one and the same as Kaiwan. Septuagint renders Kaiwan's name as Rephan.

In Lovecraftian literature, Kaiwan is also one of the names of Hastur.

Kaiwan appears in the Assembly of Nihilo's Shiodome Headquarters as a story boss. He taunts the Demi-fiend, then vanishes into one of eight rooms. Several duplicates of Kaiwan can be found in these rooms, but only one houses the true Kaiwan. He holds the green Kila.

Kaiwan can only be acquired through fusion. Enemy only variations can be found in Shinagawa's gold level Catacombs instance and Nakano's gold level Stone Site instance.

The Terminal Guardian of Ikebukuro summons Kaiwan and two Incubi when encountered by Flynn and his fellow Samurai when they try to activate the Terminal. After defeating all three demons, the Terminal will be unlocked for use.

Kaiwan will later appear during the entrance test of Tsukiji Hongwanji, but attempting to scout them at this time will result in them blowing on the candle. Kaiwan can teach Flynn the Megido and Sukukaja skills through his Demon Whisper. Once Kaiwan reaches level 44, it may evolve into Decarabia.

Kaiwan can be found within Shibuya. He can teach the Mudoon and Sukukaja skills through his Demon Whisper. Kaiwan benefits from learning darkness and support skills.

"A god in Assyrian mythology associated with the planet Saturn.
He is usually grouped with another god, Sakkut."
—Shin Megami Tensei V lore

Kaiwan is a demon of the Night race and can be found occupying an Abscess in a group of four in the Nihonbashi area of Da'at: Chiyoda.

"A god in Assyrian mythology. He is associated with the planet Saturn. He is usually grouped with another god, Sakkut."
—Devil Summoner: Soul Hackers 3DS compendium

Kaiwan is a demon exclusive to the 3DS remake, available after Nemechi evolves into the leg form (female growth path), and costs 150 D-Souls.

"A god in Assyrian legend, his name is interchangeable with Sakkut, another incarnation of the star-god, Saturn."
—Persona 5 background

Kaiwan is the fourth Persona of the Star Arcana and can be found as a Shadow in Okumura's Palace and the Adyeshach area of Mementos, with the title "Wishless Star." He is the second of two Personas to learn the Forget Boost skill and one of the four sources of the Speed Master and Marakunda skills. Kaiwan is the first Persona that the protagonist can use in battle to learn Mapsio. When itemized through Electric Chair execution in the Velvet Room, Kaiwan yields a Mapsio Skill Card.

"A god in Assyrian legend, his name is interchangeable with Sakkut, another incarnation of the star-god, Saturn."
—Persona 5 Strikers background

Kaiwan is a Persona of the Star Arcana and appears as a Shadow in the later areas of the Sapporo Jail. He will be the subject of one of Lavenza's requests, "Prison Mail, Part 3." The protagonist will need to fuse a Kaiwan that knows the Makouga skill. Principality has Makouga as an innate skill and can be obtained in the same jail, along with the other necessary Persona, Setanta, also being found in the jail. Fusing Principality and Setanta together will enable the Makouga skill to be passed on to Kaiwan.

"Written in the Book of Amos, the Old Testament, as the one who was worshiped by the Israelites before the heavenly lord was accepted. He is associated with the stars and often assimilated with Sakkutthe, god of Saturn, and was once called the god of the sky."
—Shin Megami Tensei: Liberation Dx2 compendium

Kaiwan as he appears in Shin Megami Tensei III: Nocturne 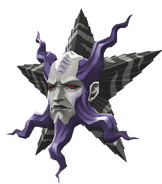