Picaro
"Your bright heart shines even on the darkest night... I shall be your strength. I am Kaguya... May your light never fade..."
—Kaguya upon being fused, Persona 4 Golden

Kaguya Hime, also known as Kaguya, is a demon in the series.

Kaguya Hime is a character from a very famous Japanese folk story called Taketori Monogatari (竹取物語), "The Tale of the Bamboo Cutter." She was found by a Bamboo cutter inside a stalk of Bamboo. The cutter raised her as his own daughter and she became renowned throughout Japan for her beauty. Many men came to ask for her hand in marriage but she refused them all. Eventually the Emperor of Japan also heard of her beauty and desired to marry her. She refused him as well, however, he still continued to love her even though they never married.

Eventually it was revealed that she was from a group of celestial people who lived on the moon. When they came to take her back, the Emperor sent guards to protect her to no avail. Before she was brought back to the moon, Kaguya gave the Emperor a small portion of the Elixir of Life to grant him immortality for his kindness. But due to his distraught at Kaguya's passing, the Emperor did not want to live forever without her. He ordered a messenger to take the elixir to the top of the highest mountain in the land and burn it. This mountain was Mt. Fuji and it is believed to be a possible cause for the name of the mountain. In different kanji 不死 can be read as "Fushi" or "Fuji" which would mean "immortal." However the kanji used today for the mountain are different, (富士）.

Kaguya is the ultimate Persona of the Aeon Arcana and can be fused after maxing out the Social Link with Marie.

Kaguya is the first DLC Sub-Persona, and is free to download. She has the unique skill Lunar Blessing.

Kaguya Hime is exclusive to Black Book and can be found on the roof of the apartment building Setsuna Kai lives in.

"A Persona of another story. A divine being born from a glowing bamboo shoot. Though many proposed to her, none could complete her strict tasks. She eventually returned to her home the moon."
—Persona 5 Compendium

Kaguya Hime appears as one of the DLC personas in game. With the purchase, the protagonist will also gain access to Kaguya Picaro, an altered version that replaces Kaguya's dress with a female Shujin uniform.

Kaguya as she appears in Persona 4 Golden

Kaguya as she appears in Persona Q: Shadow of the Labyrinth

Kaguya as she appears in Persona 4 The Golden Animation 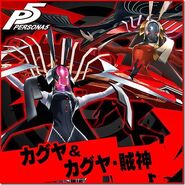 Kaguya as she appears in Persona 5 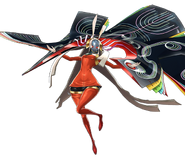 Dia Kurosawa in her Kaguya outfit