Chris Tergliafera (HD Remaster)
Jyoji Hijiri, also known as simply Hijiri, is a character from Shin Megami Tensei III: Nocturne. He is a writer for an occult magazine called "Ayakashi Monthly." He is first seen sneaking into Yoyogi Park.

After the Conception, Hijiri is found in a room studying a Terminal. He is confused about the event that recently took place and asks the Demi-fiend if there are any demons roaming around. He claims that he saw a bright light and was transported into the Terminal room. He doesn't mention the voice that told all the survivors in their dreams about Creation and Reason and doesn't remember ever entering the hospital.

Hijiri remains in the Terminal room as he realizes that he would not survive for long in a demon-infested world. He asks the Demi-fiend to find information for him and recommends that he leave the hospital, since he cannot travel himself. After he travels to Shibuya he finds Hijiri in a Terminal room. He discovers that the spinning drums of Amala ('Terminals') are connected through a weird system called the Amala Network.

The Amala Network is a passageway that allows someone to travel large distances instantly. Hijiri tells the Demi-fiend that he can use the Terminal to travel to Ginza, so he can find out more about Hikawa's plans. After accidentally dropping the Demi-fiend into an unexpected location within the Network, Hijiri learns more about the system and opens a path to Ginza.

Hijiri spends more time studying the Terminal and later opens a path to the Assembly of Nihilo. He continues to remain in the room as he knows he wouldn't be able to meet Hikawa. He then leaves when the commotion from the Mantra's siege dies down to avoid detection.

After the Mantra demons are drained of their Magatsuhi, Hijiri remarks on the power of Hikawa's Nightmare System. And is still determined to find out information on Hikawa's activities. He states that most Terminals are under Nihilo's watch and he can't learn more without alerting Hikawa, so he asks the Demi-fiend to travel to the Manikin's town, Asakusa. He learned that the town isn't under surveillance and wants to continue his search for information there.

After worrying about Isamu's involvement in the Amala Network, he sends the Demi-fiend to find him, saying that once he seizes the power of Amala, "it's all be over." He then assumes that Isamu got absorbed by the Network after he never emerged. After the Reason, Yosuga, is established Hijiri is seen embracing the Terminal. Finally going mad from power, Hijiri shows the Demi-fiend several images of various events occurring in the Vortex World and starts ranting about having the knowledge necessary for creating the new world. Hijiri angrily exclaims that only he should be the one to create the new world.

Hijiri is then pulled into the Network by Isamu and sent to the Amala Temple. Isamu leaves the passageway open for the Demi-fiend to follow. Isamu claims that Hijiri is using the Demi-fiend and should not be trusted. After releasing the stored Magatsuhi in the pyramids, Isamu allows the Demi-fiend entrance into the central pyramid, Hijiri is hanging from the ceiling in a crucifix shape and is being used as a medium for collecting Magatsuhi. Hijiri talks about choices and consequences one must endure for making those decisions.

He continues on talking about following the path he's always believed in and the extreme price he had to pay for staying on that path. His final moments were completely different from his known personality, from a cautious man who feared stepping outside the Terminal room to a reckless, seemingly suicidal man who taunted his killer. His speech indicates that he learned he was cursed and could imply he found out the truth about why he was cursed. He was sacrificed to summon Isamu's demonic sponsor, Noah.

Completing the optional dungeon, the Labyrinth of Amala's Fourth Kalpa reveals that Hijiri actually died when the Conception occurred, having failed to reach the hospital in time. However, he continues to exist in the Vortex World, reincarnated with a manikin body and having no memory of dying during the Conception, to further serve as his punishment for committing the "ultimate sin." Hijiri's punishment is to be trapped in an endless cycle of suffering, death and rebirth, being forced to witness the creation and destruction of each world without having any chance to affect the outcome.

Hijiri standing next to a terminal 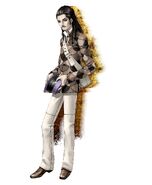 Junpei Iori as Jyoji Hijiri in Persona 3: Dancing in Moonlight