Juno is a Persona in the series.

Juno was the Roman goddess of marriage and woman, and the queen of the gods in the Roman pantheon, and the Roman counterpart of the Greek goddess Hera and the Etruscan goddess Uni. She is the daughter of Saturnus and Ops, along with her five other siblings and is married to one of her brothers, Jupiter. She had several children with Jupiter, such as Mars, Vulcan and Bellona.

Besides being the queen of gods, she is also the protector of women and patron of childbirth, and had many temples throughout the empire. She was said said to also watch over the women of Rome. As the patron goddess of Rome and the Roman Empire, Juno was called Regina ("Queen") and was a member of the Capitoline Triad (Juno Capitolina), centered on the Capitoline Hill in Rome; it consisted of her, Jupiter, and Minerva, goddess of wisdom. The epithet Juno moneta, where she is said to protect the finances of the empire, means "the one who warns," a concept used in the game (matching Juno's nature as a Persona). Another concept is the peacock feather as the symbol of the goddess, even though it actually symbolizes her Greek counterpart, rather than Juno herself.

Besides being the name of the queen of the Roman pantheon, the term "juno" is also used to describe the Roman concept of a female guardian angel, the male being referred to as a "genius." There existed many junos for many purposes, such as marriage, childbirth and virginity, but all junos shared in common the trait of watching over the entity it was born from.

Juno of the Priestess Arcana is Fuuka Yamagishi's ultimate Persona, taking the place of her predecessor Lucia. The self-confidence built in Fuuka and her realization of not being alone, as well as the necessity of helping her friends, triggered the creation of Juno. Her image still resembles Lucia's with some changes, such as the peacock's ornament around her. Fuuka's Persona still remains outside of battle, giving information about the situation for the team's advantages. She inherits all of her previous stats and abilities and eventually learns two extra skills.

In Persona 4 Arena, Fuuka and Juno's support capabilities are revealed to be much more powerful than that of Rise Kujikawa and Himiko, as hers can be used both in the real world and in the TV World, and in addition to this, she does not need to enter the TV World to communicate inside it. Juno is also revealed to have skills outside of analysis, particularly in disrupting signals and hacks, which proved useful when Labrys was hacked by the Malevolent Entity.

Seeing her ability, Juno is more focused on communications than giving benefits to party members, even with her Oracle ability, it is inferior to Himiko's version/s of benefiting the party in-battle. 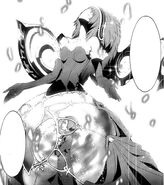 Juno as she appears in the Persona 3 Manga

Juno as she appears in the Persona 3 The Movie 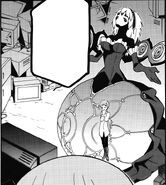 Juno as she appears in the Persona 4 Arena Manga 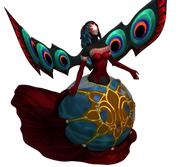 Juno in Persona Q: Shadow of the Labyrinth