Jungo Torii is a character in Devil Survivor 2. He is a chef in Nagoya.

Jungo is a tall young man with short black hair and gray eyes. His bangs cover his left eye. He wears a black hat, a black jacket and a white shirt which reads, "Fish or die!" Although his knife appears in all of his artwork, he is never shown actually using it, even in cutscenes where he instead punches enemies. However, it does show up in his static skirmish sprite. He wears dark navy bagged pants and black leather boots. He is never seen without his hat except during Fumi's experiments on him, and even then the appearance of his hair is uncertain.

Jungo is remarked upon to be one of the "simpler" characters in terms of his aspirations and his thought process. He doesn't seem to grasp many concepts of common sense or technology.

Jungo values peace and friendship, making efforts to keep the cast together whenever it seems like the bonds between them are breaking. Usually quiet and gentle, Jungo enters a trance-like rage when he sees that his friends are being threatened.

Comically, he has an unnatural fixation with chawanmushi, which becoming a running gag throughout the series. He offers it multiple times to other characters as a sign of peace making or generally as a gift.

It is heavily implied that Jungo is a chef or was a chef's assistant prior to the events of Devil Survivor 2. This is supported in a scene where he sleepwalks and refers to the protagonist as his "Boss," and it is also supported by his knowledge of herbs and plants. He may have an affinity for cats.

In the anime version, Jungo is mainly concerned with Airi and goes out of his way to protect her from harm. He does not appear to interact with others to nearly the same extent as he does in the game. Additionally, he is less expressive; while there are numerous instances of Jungo showing anger, sadness or determination in the game, he exhibits a relatively flat attitude throughout the anime. However, Jungo is shown to be rather polite in the Character Archives. 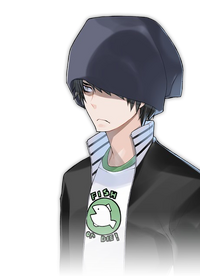 Jungo is first seen in Centering Park, fighting off rioters and breaking their phones to remove their ability to summon demons. As the rioters call in reinforcements, Jungo notices the party and asks for assistance. After the rioters are fought off, Jungo goes off to help the other JP's personnel in Nagoya.

At that moment, the party receives a death clip, where Jungo is unable to hurt rioters who are holding Daichi hostage. As a result, he is surrounded and killed. Airi suggests that the party looks for Fumi, who will be able to quickly determine Daichi's location and avert Jungo's death.

If the protagonist fails to help Fumi fix her RAM, Fumi is unable to find the location of the death clip in time and Jungo dies. Otherwise, Jungo's death is averted, and he joins the party in taking back the JP's Nagoya branch headquarters.

If the protagonist sides with Daichi, he will also be joined by Jungo (if he is still alive), Hinako and Io. Otherwise, Jungo is fought first alongside Hinako.

In the Triumphant ending, Jungo sets up a chawanmushi stall at a park in Nagoya. Keita appears alongside Jungo, perhaps by boosting publicity with his fame. Should the protagonist achieve Fate 5 with Jungo, Jungo's cat will appear in the scene.

Jungo first appears in a shop, making chawanmushi for Airi once she wakes up and explained that she fell alseep the moment she says that she doesn't have any time for rest to take back JP's Nagoya branch that has been taken over by insurgents. He tells her that it's too dangerous for her to go alone, which Airi retorts that he's coming along too, surprising him. He then asks her why they have to follow JP's and states that no matter what the situation is, he doesn't want to fight humans. Airi suggests him that he should ask the insurgents' leader, Ronaldo Kuriki, since he knows about JP's and demons from the very beginning. Airi plans for them to use the secret entrance that the insurgents doesn't know. He noticed a stain on Airi's mouth and about to wipe it, but she punches him in response to his attempt.

They enters the base through a ventilation duct, but fell on their way due to the height of his body. They quickly engages in a battle with three resistance members and easily defeats them with their demons until Ronaldo and Joe appear. Ronaldo tells them to think carefully why they are following JP's, but Airi won't listen and continue the battle. While Airi's demon, Caith Sith fights Ronaldo's Hagen, Jungo's demon, Neko Shogun, fights Joe's demon. Their fight comes to stop by Phecda's arrival, leaving them no choice but to fight together to defeat it, but they are quickly defeated. When all seems lost, Yamato appears and defeats Phecda easily with by overwriting Cerberus's abilities, followed by Alcor, who along with Bifrons, joins the skirmish between Hibiki and Yamato once Phecda is defeated. Jungo saves Airi from Bifrons' attack and later introduced himself to Hibiki once the situation has calmed down.

Jungo and Airi as well as the entire JP's and resistance members going through physical examination. He and Airi approach Daichi, Hibiki and Joe, when Airi accused them for peeking. He asked Hibiki if it was true that they were peeking on her. Hibiki immediately answers that it was an accident, which Jungo immediately believes while Airi tells Jungo not to buy their excuse easily.

He joins Nagoya faction with Airi, Otome, Joe and Ronaldo and all resistance members during operation to defeat Megrez that will appear in Nagoya.

After Megrez's defeat and last attack, Jungo use his demon to teleport him and Airi out of the attack, but due to an injury on his back, but he wasn't able to teleport the rest of them. As a result Ronaldo, Otome and Joe are killed just like the death clip predicted.

Jungo appears supporting Airi in Sapporo where she is performing a ritual to summon Kama.

He is later seen with other summoners witnessing Io being a sacrifice for Lugh in order to destroy Mizar completely.

When the world was reset to the beginning by Hibiki's wish, Jungo is seen working at a shop (the place he and Airi stay at in 3rd Day Tuesday's Disquiet) and Jungo makes chawanmushi for Airi since he wasn't able to see her at the art theater because he has work, but he does tell her that she did a good job on winning the competition.

Jungo's Fate System events focus on his relationship with a cat that he finds wounded in the park. Jungo finds a stray cat wounded and immediately takes it to Otome to be treated. Jungo then names the cat after what the protagonist wishes, funnily enough, Jungo suggests it be named after himself, confusing Otome in the process. After being treated, Jungo decides to take care of the cat and quickly grows attached to it. In the scenes, Jungo seems to have taught the cat how to chop sashimi, and frequently offers it chawanmushi, which the cat ignores. When the cat gets better and goes missing while playing, Otome and the protagonist find the cat but are shortly attacked by demons. Jungo arrives in time to save them, but then realizes that the cat would be in danger if it's staying by his side. Once the cat is fully healed, Jungo reluctantly leaves the cat in a safe area as to not keep dragging it into more danger due to his job as a demon tamer. Jungo, as a parting gift, offers the cat some Chawanmushi, and much to his surprise and pleasure, the cat eats it. Later, he watches the cat again from afar, playing with the other cats. He tells the protagonist that the cat has saved him because it made him happy even at the current state of the world and becomes determined to save the world where they live. Per the protagonist's suggestion, Jungo agreed to adopt the cat once everything is peaceful.

Jungo is one of the most remarkable physically-based characters. He, like Fumi, pours all of his stat points into one area. In his case, this is Strength, making him a powerful, yet slow physical attacker. As a result of slow Vitality and Agility growth, Jungo is naturally vulnerable to magic attacks early-game, though he can generally endure many forms of damage thanks to his amazingly high HP. Thus, Jungo's survivability and high Strength makes him a splendid candidate for the skill Assassinate and HP-dependent physical attacks, allowing him to take out enemy teams swiftly when provided with enough healing. Once his Strength maxes out, he starts gaining a respectable Vitality and Agility growth, turning him from a physical glass cannon to a medium-speed tank.

Boy in Combat, as an Ally[edit | edit source]

Vs. Tokyo, as an Enemy[edit | edit source]

If not prepared against, Jungo is quite capable of quickly eliminating teams using Assassinate. His colossal Strength and boosting via Phys Amp and Ares Aid do not help matters. Fortunately, his lack of Pierce means that a leader is completely protected from him even with Null Phys. Neutralize him with magic attacks or Pierce-enchanced Physical attacks.

"What're you doing...? Do you really think this will work?
Once the world goes back, our memories will vanish. Memories of our new friends, too..."
—Shadow Jungo upon spawning

Shadow Jungo appears on a team with Shadow Daichi and Shadow Hinako.

Retrieved from "https://megamitensei.fandom.com/wiki/Jungo_Torii?oldid=393784"
Community content is available under CC-BY-SA unless otherwise noted.