"Good job!"
—Jose to the Protagonist

Jose is a non-playable character from Persona 5 Royal. He helps the Phantom Thieves of Hearts by selling items in exchange for special flowers found only in Mementos.

Jose resembles a young, small boy about a head taller than Morgana. He has gray hair in the shape of a half egg shell, yellow eyes, and ears that are very round and unusually undefined in shape. He wears an oversized white-grayish raincoat and boots with stars and moon motifs, black leggings and gloves. Jose also wears his goggles around his neck.

Jose is a mysterious being taking the form of a boy, who only appears in Mementos. He is trying to understand humans under the promise of a "certain person," and is converting the flowers found in it into juice, as he believes drinking it will help his understanding. He collects flowers from the party by trading items and accessories in exchange. He appears to have a great understanding of Mementos, having learned how to use a hammer to hit "pressure points" that change the structure of the Palace. He will use it in return for stamps found around Mementos. By altering Mementos in this way, the drop rate of money, items and Experience earned from enemies there can be increased. During the first time meeting the party, Jose grants the protagonist a wishing star, which becomes the source which enables all Showtime unisons.

Once approximately 123 stamps have been collected, including those in the Path of Da'at, he will be waiting in the Cognition Control Room. If the party talks to him there, he will reveal that he's stuck in his progress to learn the nature of humans, and requests that the Thieves fight him in order to allow him the experience of "venting." In the fight, he will use magic grenades, try to run over the party with his car and launch Almighty fireworks. When he is defeated, he will state that he still does not understand humans, although he recognizes that humanity never gives up, and thanks the party for the experience. Satisfied, he believes he can now go back to "that person" whenever he wants. When the Phantom Thieves inquire about the individual Jose speaks of, he remarks that there are more people observing humanity than they might realize.

It is possible the individual Jose is tasked to report to is Philemon, an important figure in old Persona games.

It is later revealed that the wishing star given by Jose has been drained of all of its power by giving Morgana his helicopter form, allowing the party and Maruki to escape Maruki's Palace. Due to losing its luster in the process, the unison Showtimes can no longer be performed.

Jose also acts as the tutorial and FAQ character of the Thieves Den.

During their exploration in Mementos, the Phantom Thieves are able to collect flowers and stamps, and trade them with Jose for items and bonuses during battle.

Jose will start the battle using Drift, a highly powerful physical attack, so the protagonist should enter the battle with a Persona that blocks Physical. However, past this point, he is a straightforward boss who doesn't possess any gimmicks other than a wide variety of area of effect skills and some status skills (that he prefers to use if he has any One Mores). Unlike most bosses in this game, Jose only has one action per turn. His bulk also isn't particularly remarkable.

The party may fight him in any strategy they prefer, although Physical oriented party members or Personas should be avoided as he possesses physical resistance. At the very least, the protagonist should null Confusion. When his HP reaches below one-third, he may also spend an extra turn using Launch. Remember to have every party member guard once he does this, since he will use the next turn to use Special Fireworks, an attack that does around 1000 damage unguarded, usually enough to wipe out the entire party without fail.

One possible strategy is to use Lucy to spam Life Wall, as Jose lacks resistance to all elements; thus, he'll practically beat himself to death with his own non-Almighty attacks.

Despite being a friendly battle, losing to Jose in Mementos will result in a standard Game Over.

Jose with the protagonist

Jose with the protagonist 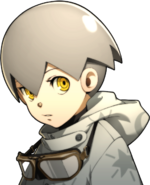 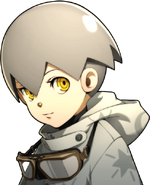 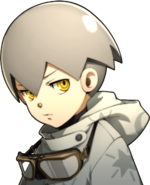 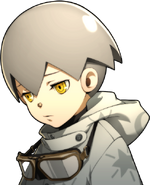 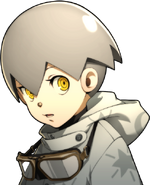 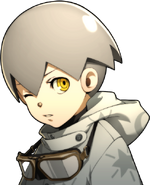