Jormungandr, also known as Midgardsomr, is a demon in the series.

Jormungandr, also called the Midgardsomr, the Midgard Serpent or the World Serpent (Old Norse: Jörmungandr), is a sea serpent of the Norse mythology, and the child of Loki and the giantess Angrboda. Its siblings are Fenrir, a monstrous wolf, and Hel, a female being presiding over the similarly named realm of the dead in Niflheim.

According to legend, Odin tossed Jormungandr into the great ocean that encircles Midgard. The serpent grew so large that he was able to surround the whole world and grasp his own tail so it would sleep on the bottom of the oceans across the whole world. It was said that when he releases, the world will end. It is one of several events that herald the coming of Ragnarök. Odin, accompanied by a giant tried to kill Jormungandr but he failed.

Jormungandr's arch-enemy is the god of thunder Thor and myths have preserved the stories over the instances in which the two meet. The last would be predicted to occur at Ragnarök, when Jormungandr would join the side of chaos with its family and so comes out of the ocean and poison the sky. Thor will kill Jormungandr and then walk nine paces before falling dead, having been poisoned by the serpent's venom.

"A colossal demon living in the sea, who just keeps growing and growing."
—Demonary, DemiKids

Known as Jormung, he can be obtained by beating Wartak's final quiz in both Light and Dark Version. Jormung has the power IceWall and can perform the combo Ragnarok with Thor.

Jormungandr is a general in the Imperium army and has taken over the Ice Temple of Ice Expanse. He is fought on Akira's route. Upon defeat he drops a Blue Crystal. 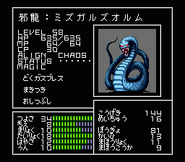 Midgardsomr from the Sega CD version of Shin Megami Tensei

Jormungandr as it appears in Devil Children Messiah Riser
Community content is available under CC-BY-SA unless otherwise noted.
Advertisement