Bryce Papenbrook
"Pathetic, misguided humans, obey me! Only I can lead you, the ignorant! If you will not obey, then you will DIE!"
—Joker

The Joker (also called the Master Joker in Eternal Punishment) is a mysterious man known to grant wishes from Persona 2: Innocent Sin.

"A masked figure rumored to grant one's dreams. Why he does this, and who he is, is a complete mystery."
—Persona 2: Innocent Sin introduction

In Sumaru City, there are rumors that a mysterious man known as the Joker can answer wishes submitted to him by calling one's own phone number. However, if the person who summons them doesn't have a wish on their hearts, Joker instead claims the dreams of his victims, and reduces them to shadows of their former selves. Joker's victims remain on the spot soulless and frozen, and they will be erased completely from the cognition of others. When Joker manifests in front of Tatsuya, Eikichi and Lisa for the first time, much to their surprise, he seems to recognize Tatsuya, bearing great hatred against him, implying that this was actually a person Tatsuya used to be acquainted with. He attacks the trio with several demons, who were all defeated. They rush in to use a Fusion Spell against Joker, but to no avail, and Joker easily overwhelms them and was close to killing Tatsuya. However, since Tatsuya has no recollection about him, he decides to leave them alone and leaves the Iris flower for him to remember his past sins.

The Joker is also the leader of the Masked Circle and is gathering the Ideal Energy from his victims' dreams to awaken the ancient city of Xibalba, in accordance with the prophecies in In Lak'ech.

It was later revealed that the Joker's true identity is Jun Kurosu, Maya's childhood friend, and the Masked Circle used to be a Featherman-roleplaying group consisting of Maya, Tatsuya, Eikichi and Ginko. The Joker is merely a form Jun took to claim punishment from those he deemed guilty for the fire that "killed Maya Amano" years ago, supposedly being his childhood friend Tatsuya Suou. In reality, the person he believed was the arsonist was a false memory created by Nyarlathotep, and the real arsonist was Tatsuya Sudou, whom Suou defended against by awakening his Persona. Maya was also shown to be alive, although scarred with pyrophobia. Nyarlathotep, as seen during the game's events, took the form of his father and manipulated Jun into doing his bidding.

When the party finally reaches him at the Caracol, the Fuhrer, his troops and the Shadow Selves of Tatsuya, Lisa and Eikichi can be seen alongside Joker, who collects the five crystal skulls to unleash Xibalba. Maya tells him that dreams shall not be given but attained via one's own power, yet Joker rebukes her as having an overly sugarcoated view, with the Furher agreeing with him, that humanity only wants a ruler to think for them, and Joker announces that he will guide humanity to a golden age. However, when Xibalba emerges from the ground, the Joker displays signs of remorse for unleashing Xibalba and suddenly recollecting that he's actually Jun. He also had a feeling that Tatsuya Suou might not be the arsonist who traumatized Maya. Queen Aquarius sacrifices herself to protect Joker/Jun from one of the Longinus Knights, revealing herself to be actually Jun's mother. Joker tries to fight back with his Persona, Nyarlathotep, but to no avail, and the Furher flees alongside his troops. He then orders Shadow Lisa, Shadow Eikichi and Shadow Tatsuya to leave, before displaying further signs of fully recollecting his true identity. Despite this, Nyarlathotep reaches out to him and tells him that he is Joker and Tatsuya Suou is the arsonist.

After Joker is defeated, he is possessed by Nyarlathotep and is forcibly transformed into Angel Joker. Should the party defeat the Angel Joker as well, he will be freed from Nyarlathotep's manipulations and revert back instantly into Jun Kurosu. Jun will join the party permanently in place of Yukino Mayuzumi afterwards.

An A-Rank BattleNet opponent who can supposedly grant any wish. He has a collection of rare demons, and is said to act unpredictable and have a lot of style. He gives a Scylla after 7 defeats, Clotho at 17 defeats, and Lachesis at 27.

Joker as he appears in the PSP intro 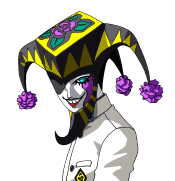 Joker's portrait from the PSP version of Persona 2: Innocent Sin.