Jiraiya is a demon in the series.

Jiraiya (児雷也) is a character from Japanese folklore. He is a ninja who uses shapeshifting magic to morph into a gigantic toad.

Jiraiya is an Electric based skill that Black Mask Fukoshi use as their special attack. It deals damage to all foes that aren't block or hiding.

In Persona 4, Jiraiya is Yosuke Hanamura's initial Persona. When he and the protagonist enter the Midnight Channel to investigate the death of Saki Konishi, Yosuke faces his "other self" and obtains the facade used to overcome life's hardships, the Persona Jiraiya.

After entering the Midnight Channel, Teddie brings them to an area similar to the Central Shopping District. This area, called Twisted Shopping District, manifests the inner thoughts of Saki Konishi. When Yosuke hears of how Saki had been feeling when she worked with him at Junes, he could not help feeling guilty. This prompts the appearance of his "other self," Shadow Yosuke.

The Shadow mocks Yosuke's purpose for being there, revealing that he has only come for the thrill of exploring the area. The Shadow also reveals that Yosuke never saw Saki or the others as friends, but rather a means to escape his insecurities of being alone. Yosuke repeatedly denies the Shadow's claims in fear of facing his true feelings.

The Shadow taunts Yosuke until he finally gives in. This fuels the Shadow's transformation and attacks the party. The protagonist summons his Persona and defeats the Shadow. With the encouragement from the protagonist, Yosuke then accepts his "other self" and harnesses the power of Persona as Jiraiya.

Jiraiya once again returns as Yosuke Hanamura's Persona. It is the only Persona in the game that is capable of using Garu skills, besides Thanatos.

After completing a song, Jiraiya can be summoned to play a Gibson Flying V guitar.

Jiraiya's silhouette in the background

Jiraiya with the other Personas of the team.

Concept Artwork for Persona 4 The Animation

Jiraiya in Persona 4 The Animation 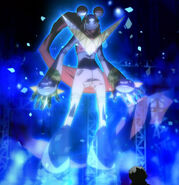 Jiraiya appears in Persona 4 The Animation

Jiraiya after being summoned

Jiraiya in Persona 4 The Golden Animation

Jiraiya in the Persona 4 Manga

Jiraya playing the guitar of Persona 4: Dancing All Night 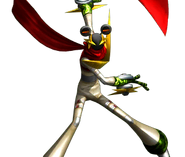 Jiraiya in Persona Q: Shadow of the Labyrinth

Jiraiya in Persona Q: Shadow of the Labyrinth Side P3

Jiraiya in Persona Q: Shadow of the Labyrinth Side P4 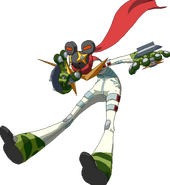 Jiraiya, alongside Yosuke and Tsubaki in Bururaji

Jiraiya as it appears in Persona 4 Arena manga. 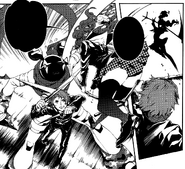 Jiraiya as it appears in Persona 4 Arena Ultimax manga.

Appearances in other media

Jiraiya appears alongside Yosuke in an episode of the BlazBlue radio show "Bururaji," for a special promotion of Persona 4 Arena and Persona 4 Golden.