Jambavan is a demon in the series.

Jambavan, also known as Jambavantha, is the King of Bears in Hindu mythology. Krishna, the god of compassion and love, was suspected of killing Prasena for the gemstone Syamantaka. It turned out that Prasena had been killed by a lion that took Syamantaka, and that lion had been slain by an oblivious Jambavan. Krishna tracked down and fought Jambavan for the gem. The fight lasted for three weeks, at which point Jambavan finally realized who his opponent was and why he was fighting, at which point he surrendered the gem, and offered his daughter Jambavati in marriage.

"Son of Vishnu and the wise King of the Bears in Hindu lore. He leads an army of bears.
In the Valmiki Ramayana, he assisted Prince Rama along with Hanuman, the monkey god, and fought against Ravana. In honor of his service, Prince Rama granted him the blessing of being weak only against his father. But in the Mahabharata, he has to fight Krishna, an incarnation of his father Vishnu, over a magic jewel, during which he is slain."
—Devil Survivor 2 compendium 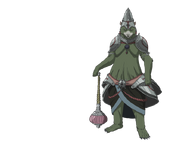 Jambvan in Devil Survivor 2 The Animation

Jambavan as he appears in Devil Survivor

Jambavan as he appears in Devil Survivor 2

Jambavan as it appears in Devil Survivor 2 The Animation

Jambavan as it appears in Card Summoner
Add a photo to this gallery
Retrieved from "https://megamitensei.fandom.com/wiki/Jambavan?oldid=389819"
Community content is available under CC-BY-SA unless otherwise noted.