Jack Ripper, or Jack the Ripper, is a demon in the series.

Jack the Ripper is the name given to an infamous serial killer who terrorized London in the late 19th century, who remains unidentified positively to this day. The killer would typically prey upon female prostitutes in the area's slums, cutting their throats and mutilating their abdomens.

The media was quick to cover the murders, and the case was the talk of the town. Scotland Yard came up with a few suspects after a thorough investigation, but the case went unsolved. This unusual case piqued the imaginations of people for many years, but a possible suspect was identified as Aaron Kosminski, a Polish barber, however DNA evidence linking him to the crimes has been contested in peer review.

"A serial killer who terrorized London in the 19th century.
He killed prostitute after prostitute in the slums of London, then mutilated their bodies. The media was quick to cover the murders, and the case was the talk of the town. Scotland Yard came up with a few suspects after a thorough investigation, but the case went unsolved. This unusual case still piques the imagination today, with aspiring detectives coming up with their own theories. Whether or not this Jack is the culprit remains a mystery. Perhaps the image of the murderer conjured up this demon."
—Shin Megami Tensei IV profile

Jack the Ripper can be found in Ueno. He can teach Flynn the Tetanus Cut skill through his Demon Whisper. Jack the Ripper is one of the demons needed in order to fuse Black Frost using special fusion.

Jack the Ripper appears again in "Training Battle 6," where Flynn and his party must use damage reflected by his demons' innate resistances to defeat the enemies while switching summoned demons according to what is needed. The enemy demons are the Jack Brothers +, a party of Pyro Jack, Jack Frost, Jack the Ripper and Hairy Jack. During the first enemy turn, Jack the Ripper will use a physical attack targeting Flynn's party. On the second enemy turn, Jack Frost will attempt a Mabufula. For the third turn, Pyro Jack will use Maragion. On the next turn, Kanbari will need to use Tetrakarn to ward off Hairy's Jack's attack. Attacking Hairy Jack at any point may result in him using Retaliate, which will defeat one of Flynn's demons prematurely.

Jack the Ripper has a chance of killing a successfully recruited demon just before they get added to Flynn's party. He will then join Flynn's party while the killed demon will not.

Jack the Ripper appears in the initial areas of Ueno. He can provide the skills Tetanus Cut and Mudo through his Demon Whisper.

Jack Skelton is one of the three titular Jack Brothers that make up the games playable cast alongside Jack Frost and Pyro Jack. Unlike his brothers, he lacks a ranged attack, but has one of the strongest attack stats in the game to compensate. His character-specific ending focuses on the enemies arguing after he escapes.

Jack Skelton as he appears in the credits of Jack Bros.

Jack Skelton as he appears in Jack Bros. 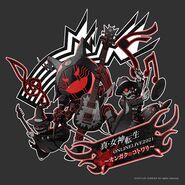