Izanami (イザナミ, Izanami) is a recurring important character revolving the Megami Tensei series. In later adaptions, she is more often portrayed alongside with Izanagi. Izanami later plays an important role in Persona 4.

Izanami-no-Mikoto is the primordial Shinto Mother Goddess and sister/wife to Izanagi-no-Mikoto. She helped stir the oceans on the Bridge of the Heavens, and settled down with Izanagi on Earth on their island Onogoro. On their first marriage ceremony she made the mistake of speaking to Izanagi first, so the ritual had to be repeated. After the second ceremony she gave birth to various deities. But then she gave birth to Hi-no-Kagutsuchi the Deity of Fire, and died from the severe burns of the flames. When she perished, she went to Yomi, the Land of the Dead. Izanami ate from the furnace of Hell, and went to petition the deities of the Netherworld to let her go. She made her husband promise not to look at her, but Izanagi did anyway and was greeted by the sight of a rotting corpse with the Eight Thunders protruding from her body. Ashamed by Izanagi's indescretion, she sent the Hags of Hell, the Thunders and an army of demonic warriors after him. Izanagi sealed the entrance to Yomi with a boulder, and Izanami cried, "Why did you do such a thing to me?! You betrayed me!! Remove this boulder this instant or I'll kill 1000 of your subjects everyday!" Izanagi countered, "For every 1000 you kill, 1500 shall be born in their place!" and thus their marriage was over. She became the Yomotsugami, the Goddess of the Land of the Dead.

Izanami is the reincarnation of Yumiko Shirasagi, a friend of the protagonist, Akemi Nakajima. After witnessing Akemi's secret activities to using computer programmings to summon out Digital Devil Loki, Yumiko was assaulted by Loki, despite Akemi's plead for her to stop meddling in his business. During Akemi's final showdown with Loki, Akemi, who is revealed to be a reincarnation of Izanagi teams up with Yumiko, who now remembers her past memories as Izanami to defeat Loki.

Disguising as an Attendant working in the Moel Gas Station of Yasoinaba, Izanami awakened Tohru Adachi, Taro Namatame, and finally, the Protagonist' potential of invoking Personae. It is unknown exactly how many humans Izanami awakened, however, she implies that many have been awakened by her.

Using her identity as an attendant of the gas station, Izanami spread rumors regarding the urban legend of the Midnight Channel. As the Midnight Channel reflects the images of the viewers' desires, Izanami believed that this would, make her understand better about humanity's wishes.However, Adachi, one of the awakened ones, uses his powers for murder, and carries out the belief of humanities' insecurities, leading Izanami to believe that what humanity actually wishes is a world of oblivion and stillness, and thus Izanami subjects to overrun the world with Shadows. Acknowledging Adachi's plans, Izanami created the god of fog, Ameno-sagiri, and later, the Midnight Channel.

After the Protagonist' first interaction with the Gas Attendant, Izanami visits the Protagonist in his dream. In there, Izanami taunts the Protagonist' wish to reach the truth, but asks him to follow her if he truly wishes to seek the truth. Izanami's plans of using the Protagonist' eventually was a success. In the events of Normal Ending however, the Protagonist' Wild Card ability and his determination is something she did not foresee, ignoring the urges of killing Taro Namatame, the wrong suspect of the murders allows the Investigation Team to eventually find out the true culprit: Tohru Adachi.

In the events of the True Ending, after defeating Tohru Adachi and defying Ameno-sagiri's plans to overrun the world with Shadows, the Protagonist manages to find out the Attendant's true identity as Izanami, and upon realizing the Protagonist' determination of seeking the truth and to stop her from carrying out her plans again, Izanami chastises the Protagonist' persistence to seek the truth, and tells him that she shall await the Protagonist's defeat in the "other world". Izanami's reality within the Midnight Channel, Yomotsu Hirasaka, derives from a place taken from the Japanese mythology of Izanagi and Izanami. It also takes the appearance of traditional Japanese Shinto Shrines.

Upon Izanami's defeat, Izanami exclaims that she will not interfere with humanity anymore. She encourages them to live and face with their own decisions, but cannot guarantee their happiness, and fades away.

Despite Izanami's antagonistic nature, she truly wishes for humanity's happiness, as evident that she later congratulates the Investigation Team for discovering the truth, as well as defeating her. 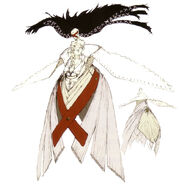 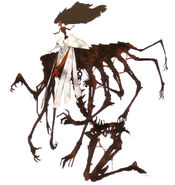 Izanami-no-okami
Add a photo to this gallery

Retrieved from "https://megamitensei.fandom.com/wiki/Izanami?oldid=27532"
Community content is available under CC-BY-SA unless otherwise noted.