Picaro
"Thou art I, and I am thou...
From the sea of thy soul, I come...
From the very moment of my emergence, I have been a guiding light shed to illuminate thy path...
I am the original god...
Izanagi-no-Okami. "
—Izanagi-no-Okami

Izanagi-no-Okami is a Persona in the series.

"The Father of all in Japanese myth, as well as the ruler of creation. When forbidden to see his wife Izanami, he broke the promise, resulting in the two being separated from each other forever."
—Persona 4 compendium

The ultimate Persona of the protagonist, Izanagi-no-Okami can only be accessed in the events of the True Ending, which can be unlocked provided if the protagonist manages to choose the correct choices.

In the True Ending, the protagonist realizes that Izanami is the true mastermind behind the bizarre murder cases, and ventures into her reality within the Midnight Channel, Yomotsu Hirasaka, to put an end to her plans. Eventually facing Izanami, however, the protagonist and his comrades are engulfed by Izanami's Thousand Curses. Fortunately, the protagonist hears the voices of his friends, telling him to continue fighting on.

Accumulating the powers and bonds he forged, the protagonist channels the powers of his Social Links to his initial Persona, Izanagi, transmogrifying Izanagi into his true form, Izanagi-no-Okami. Enduring all of Izanami's assaults, the protagonist takes off his glasses, and ultimately summons Izanagi-no-Okami, ending Izanami with one powerful strike, Myriad Truths then free his comrades after the battle.

While Izanami's fabricated goddess form bears a resemblance towards Izanagi-no-Okami, having a white-ish color theme, her true form, Izanami-no-Okami takes the form of a rotting, death-ridden form, similar to the Japanese mythology.

Immediately after both the P3 hero and P4 hero reach level 55, the request, The Power of the Wild Card, becomes available. The request for just the two Heroes to fight Margaret in You in Wonderland Chapter 3. Immediately after the fight, Orpheus evolves into Messiah and Izanagi evolves into Izanagi-no-Okami. Due to the two Wild Card users being brought together, similar to everyone being able to equip two Personas, once the two heroes attain their ultimate Personas, everyone else is able to as well, with their Personas evolving once they reach level 55. Each ultimate Persona only has one skill unique to it, Izanagi-no-Okami's being Heat Riser, which greatly raises one ally's attack, defense, hit and evasion for 3 turns.

Yu summons Izanagi-no-Okami after completing Reach Out To The Truth (Dancing on PERSONA STAGE) against Mikuratana-no-Kami. Izanagi-no-Okami's instrument is a double neck guitar similar in appearance to his normal weapon. One neck is a bass guitar, the other is an electric guitar.

Izanagi-no-Okami is a DLC Persona, available as part of the Persona 5 Royal Persona DLC bundle which also includes Raoul and Athena for $9.99, and comes in both his regular form from Persona 4 and a Picaro variant. Both variants appear as the sole Personas of the World Arcana, and cannot be fused with other Personas, but can still be used with Gallows and Electric Chair fusion. In addition to being able to be summoned from the compendium, both variants can also be obtained via Advanced Fusion.

Izanagi-no-Okami's unique skill is "Myriad Truths," which deals three hits of heavy Almighty damage to all foes, making it one of the most powerful attacks in the game. In addition, his unique trait is "Country Maker" which increases his attack and defense based on the protagonist's Persona Compendium completion percentage; at 100%, damage dealt is doubled and damage taken is halved. Itemizing him via the Electric Chair yields the Shining Headband, which boosts all stats by two points and bestows the Invigorate 3 skill. During a fusion alarm, he instead yields the Shining Headband R, which adds three points to each stat as well as granting Invigorate 3. The Picaro variant yields a Mediarahan skill card normally, and a Salvation skill card during a fusion alarm.

Unlike the ultimate Personas of the protagonists from the previous series, Izanagi-no-Okami holds the largest fusion prerequisite to summon. Apart from completing the True Ending event in the previous cycle, the protagonist must also perform a Dodecagon Spread Fusion in the Velvet Room (which becomes available July, 11th) with specific Personas to summon Izanagi-no-Okami:

The significance of the Personas used for this fusion can be fully seen in the Japanese version, where every first kana in their names combined spells the sentence, "Create Izanagi-no-Okami" (イザナギノオオカミツクレ, Izanagi-no-ookami-tsukure)?.

Much like in Persona 4, fusing Izanagi-no-Ookami requires a series of Personas whose names spells a sentence.

The entire text reads as "Come forth, the great god of Yasoinaba" (ヤソイナバノオオカミクル, Yasoinaba No Ookami Kuru)?.

Izanagi-no-Okami as he appears in Persona 4 The Animation

Izanagi-no-Okami as he appears in Persona 4 The Animation 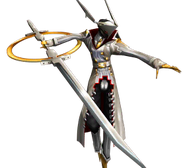 Izanagi-no-Okami in Persona Q: Shadow of the Labyrinth

Izanagi-no-Okami being invoked in Persona Q: Shadow of the Labyrinth