Picaro
"I am thou, thou art I. The time has come. Open thy eyes and call forth what is within."
—Izanagi to the protagonist, Persona 4

Izanagi is a demon in the series.

Izanagi (伊邪那岐, 伊弉諾) is a Japanese creation deity born of the seven divine generations in Japanese mythology. He is also referred to in various chronicles such as the Kojiki and Nihon Shiki as Izanagi-no-Mikoto (伊邪那岐命, 伊弉諾尊), the "male-who-invites."

In marriage, he and Izanami have created many of the islands (all sans Onogoro Island) and deities of Japan. When Izanami died following the disastrous birth of Hi-no-Kagutsuchi, Izanagi slew the fire god out of grief stricken rage, then tried to retrieve her from the underworld, but failed. He mistakenly looks at her while she's in a rotting, monstrous state in the underworld, which shames her. She attempts to kill him, and swears to kill a thousand of his men a day. Izanagi retorts that he will make sure that a thousand and five hundred will be born each day.

After returning to Earth, Izanagi performed a cleansing ritual in the river Woto to be rid of the taint of Yomi that coated his body, during which created the Haraedo-no-Okami. During that, from his left eye is born Amaterasu, from his right eye, Tsukiyomi, and from his nose, Susano-o. Izanagi separates the visible world among the three, with Amaterasu getting control over the cultivation and crops, Tsukiyomi over the moon and night, and Susano-o over the sea, the storms and the winds. After this story, Izanagi no longer appears in myths.

Izanagi first appears in Asmodeus' cave after the protagonist defeats the demon lord. Later, after Izanami is revived and the Palace Ring is obtained, Izanagi will teleport him from Frontier Island to Lucifer's Temple.

If the Demi-fiend manages to achieve a qualifying Press Turn count in all the Burial Chambers in the Labyrinth of Amala, then he will be awarded an extra Press Turn by Izanagi and Izanami during a second playthrough. This is accomplished by meeting with Cerberus in the first Burial Chamber of the First Kalpa and following him to the secret Tomb of Yomi in the 666th basement of the labyrinth.

"One of the ancient gods who existed before Japan was formed. He created the Ouyashima from chaos, then gave birth to countless children and laid the foundation of soil and nature."
—Persona 4 compendium

Izanagi is the protagonist's initial Persona. When the protagonist first encounters the Shadows, Izanagi's voice prompts him to awaken to the power within. The protagonist then mutters the word "Persona" and summons forth Izanagi.

In the events of the Normal Ending, Tohru Adachi is capable of invoking a bloodied, more malevolent form of Izanagi, called Magatsu-Izanagi. While the Investigation Team is surprised at the similarity of Adachi's Persona to that of the protagonist, the events of the True Ending reveal that the protagonist, Adachi and Namatame actually "received" their Personas from the Moel Gas Station Attendant, whose true identity is revealed to be Izanami. According to Izanami herself, she gave the Persona of Izanagi to three outsiders who represent Hope, Despair and Emptiness.

The protagonist represented Hope and thus his Izanagi is "pure." Adachi represented Emptiness, and as he refused to see the truth and gave into murderous corruption, his version of Izanagi became tainted and malevolent as well. Namatame, presumably, would also receive another version of Izanagi, which represented Despair, reflecting his desperate idea of "saving" people from the murders by throwing them in the Midnight Channel, although his Izanagi is never shown in the game.

During the True Ending's final sequences, in the protagonist's final confrontation with Izanami-no-Okami, he gathers the strength of the heart accumulated by his Social Links and forms The World Arcana, transforming Izanagi into Izanagi-no-Okami. The Persona easily dispatched Izanami-no-Okami with his Myriad Truths skill.

Izanagi returns as Yu Narukami's Persona. He, along with Caesar and Thanatos, are the only Personas who can use Zio spells; though Take-Mikazuchi can also use Electricity skills, none of them are Zio spells.

However, like Aigis and Athena, Yu is limited to Izanagi and cannot change Personas during fights, save for his Instant Kill.

Also unique to this game is that Izanagi knows the skills/spells Swift Strike, Ziodyne and Cross Slash.

Izanagi merges with Magatsu-Izanagi to become a giant sword in P4 Story mode, which is used to strike down the Malevolent Entity.

Izanagi can use a bass guitar as his instrument after completing a song.

"A Persona of another story. One of the ancient gods who existed before Japan was formed. He created the Oyashima from chaos, then gave birth to countless children and laid the foundation of soil and nature."
—Persona 5 compendium

Izanagi appears as a DLC Persona, alongside an alternate version of him called Izanagi Picaro. Izanagi, along with Orpheus, are priced at $2.99, though he can be downloaded for free if the player ordered a digital pre-order copy of the game.

Izanagi is a level 99 Battle Net opponent in Red Book. He uses his children Tsukuyomi, Susano-o and Amaterasu as his personal demons. He awards Mirai Kaname with Amaterasu after being defeated.

Izanagi as seen in the Tomb of Yomi in Shin Megami Tensei III: Nocturne

The protagonist with Izanagi

Izanagi in the Persona 4 Manga

Izanagi in Persona 4 The Animation

Izanagi in Persona 4 The Animation

Izanagi in the first episode of Persona 4 The Animation

Izanagi after being summoned

Izanagi as he appears Persona 4 The Golden Animation

Izanagi in Persona Q: Shadow of the Labyrinth Side P3

Izanagi in Persona Q: Shadow of the Labyrinth Side P4

Izanagi in Persona Q: Shadow of the Labyrinth Side P4 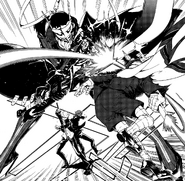 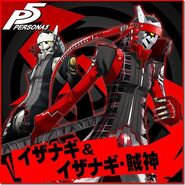 Izanagi in Lord of Vermilion Re: 2

Izanagi in Lord of Vermilion Re: 2